by ToP
in Pakistan
4 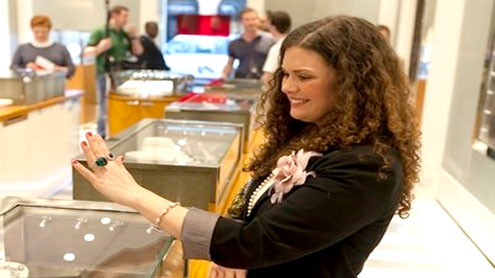 LONDON: You may be interested in the royal wedding. Enthusiastic even.But you are probably not as excited as Allison Lackey, a 24-year-old from Chicago who happily admits to spending too much time contemplating Prince William and Kate Middleton’s nuptials.”I’ve been thinking a lot about the logistics,” Lackey says.That’s the logistics of her own day on April 29, not the challenge of marshaling 2,000 guests, tens of thousands of well-wishers and a vast global television audience to view the royal wedding at London’s Westminster Abbey.”I’m going to get home from work, literally go straight to bed, get up at midnight, make some tea and start watching the coverage,” Lackey said. Later, there will be high tea at Chicago’s storied Drake Hotel. “It’s going to be a big 24 hours.”Lackey is royally obsessed. The corporate communications manager wears a replica of Princess Diana’s wedding ring that her boyfriend gave her for Christmas and is throwing a bachelorette party in honor of Middleton, the soon-to-be British princess. (Needless to say, Middleton won’t be attending).

Who better than Lackey to be a contestant on “Royally Mad,” a BBC reality show that brings five crown-crazy Americans to London on a tour of sites replete with royal history?Contestants also pit their royal wits against one another to compete for a “mystery grand prize” — which is not, alas, an invitation to the Westminster Abbey ceremony.The show, which airs in two parts on April 12 and April 19 on BBC America, follows the five Americans as they visit Westminster Abbey, get a polo lesson from William’s instructor, try on hats at the Philip Treacy boutique and spend an evening at Mahiki, a nightclub favored by the young royals. There is also a makeover from Middleton’s stylist and tour of Kensington Palace with a friend of the late Princess Diana.The contestants — four women and one man — come across as likable, frighteningly knowledgeable about the monarchy and unabashedly crazy about all things royal.”Their enthusiasm is completely infectious,” said Cat Deeley, a British TV personality who hosts the show and is one of its executive producers.”Royally Mad” is one of a slate of BBC programs aimed at tapping the vast American appetite for royal wedding coverage. The network also plans to show the BBC’s domestic coverage of the ceremony commercial-free on its American channel.

Deeley, who presents TV shows both in her native England and in the U.S. — where she hosts “So You Think You Can Dance” — has been mulling over why so many Americans are so very interested in the British royal family.”I think it’s because they just don’t have one themselves,” Deeley said.”On both sides of the Atlantic, we’re brought up with fairy stories and princes and princesses and living happily ever after. The closest thing they have is the first lady and the president, and I don’t think there has been anybody in the glamour stakes since the Kennedys,” she said.For Lackey and fellow contestant Holly Passalaqua, royal mania was forged in childhood, nurtured by mothers who passed on their love for the late Princess Diana, and memories of her fairytale wedding to Prince Charles in 1981.Lackey said one of her earliest memories is royal-related.”I was a flower girl for my aunt’s wedding,” she said. “I’d never been to a wedding before, I didn’t know what to expect. My mom was trying to put it into perspective for me and she said, ‘Let me show you my own favorite wedding'” — and produced a video of Charles and Diana’s ceremony.”That was my first introduction to the pomp and circumstance and the delight that happens at those big royal occasions.”

Passalaqua, 29, also caught the royal bug young — again, from her mother, who wrote letters to Prince Charles as a girl. She and her mom used to get dressed up and go out for tea — they called them their “Princess Diana” teas. Her first book project, in second grade, was on Diana.Today she blogs about celebrities and lives in Los Angeles with her two cats — Prince William and Prince Harry.Passalaqua and Lackey both say one of the best things about “Royally Mad” was meeting others who share their obsession. The other contestants are Lori Butler of La Vergne, Tennessee, Rich Lorich, 41, of Los Angeles and Karen Bishop, 29, of Jackson, Mississippi.”I have friends who are interested, who are looking forward to the royal wedding — but not as much as me,” Passalaqua said. “It’s like people have sports teams. Some people like the (New Orleans) Saints, I like the royal family.”She said she never thought her hobby was unusual until the royal engagement happened in November.

“My boyfriend and I have been together for three years and he never knew. I think when he saw how interested I was he thought, ‘What’s this?’ But he has been so understanding and supportive,” Passalaqua said.The trip to London has given the Americans insight into Britain’s royal history — and a sense of its wild paparazzi culture. The group was snapped by paparazzi when they visited Mahiki with Deeley, a celebrity in her own right. Lackey said it gave her a glimpse of what daily life must be like for the young royals.”I feel almost guilty buying every magazine and being so immersed in this stuff, because when you think about it, they have to hate this stuff,” Lackey said. “They really have no privacy. It’s kind of sad for them. You want them to have that day-to-day normalcy that the rest of us have.”As a result, she has moderated her royal habit — though she’s not going to give it up anytime soon.”I’ll be honest, I was always scouring the celebrity blogs,” Lackey said. “Now I look for the Clarence House Twitter feed, look for the official updates.”The fire is still raging within me for all things related to the royal family.” – Yahoonews