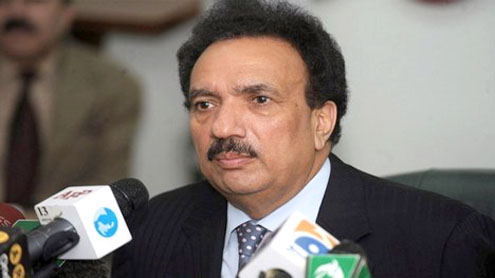 ISLAMABAD: Minister for Interior Rehman A. Malik  informed the National Assembly on Tuesday that 90,000 illegal passports and Identity Cards (IDs) acquired by Afghan nationals had been cancelled.  As many as 215 employees of the National Database and Registration Authority NADRA involved in the corruption are under investigation and cases will be registered against them, Rhman Malik said, while speaking on a point of order.The minister, however, commended NADRA for its overall performance during the last three years. He said the Authority was not only providing service to the people in the country but also to many friendly countries. “Thus it is the only department which is contributing towards the country’s economy,” he said.

He said change of address on IDs was not a criminal activity but a legal right of the people. He said NADRA’s work should be appreciated as it besides providing National Identity Cards (NICs) to the people was doing a lot of service in law enforement operations against terrorists and militants. The arrest of 50 per cent of the terrorists had become possible due to the information provided by the NADRA, he said.Rehman Malik assured the House that the issues related to law and order in southern Punjab would be resolved. He said that he had already discussed these issues with the Punjab Chief Minister and soon a high-level meeting would be held to chalk out a strategy for tackling them.Speaking on points of order, members of the national assembly Usman Tariq Zai, Mian Mitha, Sardar Bahdur Khan Sihr, Dr. Ayub Sheikh, Khawaja Sehraz, Awais Leghari and others drew the attention of the House towards many issues, including law and order and loadshedding problems being faced by the people in their respective areas. Nadeem Afzal Chan appreciated NADRA’s role. – APP