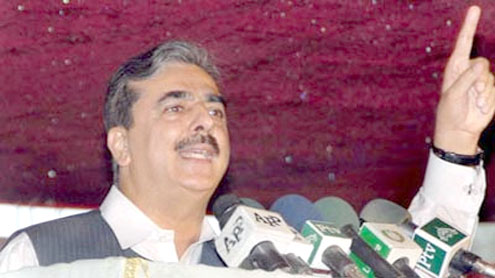 The Prime Minister said such stories were published in the press that the government would bring a resolution in the Parliament against the judiciary and expressed sorrow over it that when the Supreme Court announced its decision regarding the case,  there was no justification for such kind of speculations over the issue.

“How can a government which restored the 1973 constitution in its original form and its leadership struggled for restoration of judiciary would not respect the judiciary ,” the Prime Minister said.He said framing the Constitution was the job of the Parliament while the Judiciary makes its interpretation, the Prime Minister said and added trichotomy of powers rests  with the  Parliament, Executive and Judiciary.

The Prime Minister said that transfers and postings was the prerogative of the Chief Executive and added that the Supreme Court’s verdict has raised the stature of the Parliament and Judiciary.Prime Minister Gilani said that “our government had always implemented the decisions of the Supreme Court in letter and spirit, adding,  whether it was the NICL, NRO, NAB, PCO judges cases or the case of reverting of 54 federal secretaries, we always respected the apex court’s orders and never went for appeal”.

He said that the senior most judge of the Supreme  Court Justice Javed Iqbal  has endorsed our stance that the government has implemented all the decisions of the apex court .He said all the accused of ARY gold case including Mohtarma Benazir Bhutto were acquitted by the Accountability Court and asked  the MPs who registered the case and how much state amount was spent on it.He said now the people also asked why Mohtarma Benazir Bhutto was implicated in a such a false case.The Prime Minister expressed dismay over the statement of Opposition  provoking the bureaucracy to rise against the government, adding, when the issue of the federal secretary was resolved  such  kind of statement has no justification.

He said that the government was ready to jointly struggle for  protection and strengthening of all the state institutions.He said that all the major issues of 18th  and 19th Amendments, 7th NFC award and the related issues of Constitution were collectively resolved by the government and opposition.The Prime Minister said that non-issues should not be projected.“I have great regard for bureaucracy and all  those officers  who are sent to the centre from the provinces are accommodated,” he said.
He said he has nothing to do with the promotion of senior bureaucrats rather it is the Central Selection Board that decides about their promotions.Contrary to it, the Prime Minister reminded members of the PML-N that it was during the tenure of their governments when the Superintendent of Police was handcuffed in Faisalabad. – Nation

Govt to continue to pursue politics of reconciliation: PM