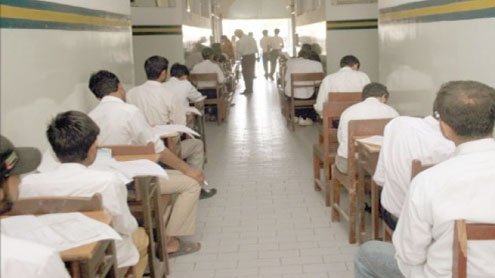 LAHORE: The Board of Intermediate and Secondary Education (BISE) announced the result for Matriculation Annual Examinations 2011, on Tuesday, in a ceremony held at the Alhamra Hall.

The chief guest of the event was Punjab Minister for Education Mian Mujtaba Shujaur Rahman while Lahore Board Chairman Muhammad Akram Kashmiri, Secretary Mushtaq Ahmad Tahir, Secretary Schools Aslam Kamboh, Higher Education Additional Secretary Zarq Mirza and Controller of Examination Manzoorul Hassan Niazi were also present on the occasion.On the whole, 26,011 out of 120,977 candidates passed the exams, with the passing percentage being 58.72 percent.Similar to the tradition being followed in the last several years, this year too girls outshone boys in the matriculation examination.

The students who secured top positions, while expressing their views, stressed upon the significance of uniform education for every one, praised the new computerised objective answer sheet system and emphasised on equal rights and opportunities for women.Larabe Farrukh from KIPS High School for Girls, Johar Town, topped the Science Group and secured an overall first position. While talking to Daily Times, she said she had always wanted to become an astronaut, however, due to the lack of facilities and infrastructure in Pakistan she decided to go into the field of medicine.

She called for stricter measures to counter cheating, especially in the objective exams. “This is a very good examination system if somehow the menace of cheating could be eliminated from it,” she said. She also emphasised on equal rights for women, pointing out that women had lesser job opportunities in Pakistan.The second position holder, Saman Habib from LDA Model Girls High School, Allama Iqbal Town, said that Pakistan was way behind other countries in the field of education, adding, “Our youth should come forward to take charge of the country’s matters.” She also said that the government should take steps to create more jobs for women.

“Lesser representation of women in practical fields, especially in engineering, and public transport are some of the main issues that should be immediately resolved,” said Fatima.Meanwhile, Muhammad Saif bagged the third position among boys in the Humanities Group. Saif hailed from a village in district Kasur, his father being a labourer. While talking to Daily Times, he said that educational facilities in the rural areas required special attention from the government since the schools their lacked basic facilities and infrastructure. – Dailytimes