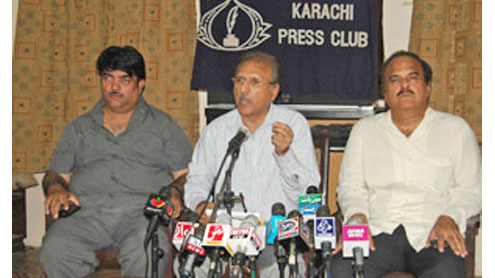 KARACHI: Pakistan Tehreek-e-Insaf (PTI) has demanded imposition of governor rule in Sindh to control ongoing violence in Karachi.PTI secretary general Arif Alvi made this demand while addressing a press conference at Karachi Press Club on Wednesday.

He said the present rulers had failed to discharge their primary duty of safeguarding the lives and properties of citizens. He strongly condemned the ongoing massacre in the city, particularly the brutal murder of two PTI activists, who were abducted and later their bodies were found from gunny bags at SITE area on Aug 1.

PTI leader said they were going to lodge murder case of PTI workers, in which Sindh governor, chief minister, home minister, relevant superintendent of police and station house officer would be held responsible. He said escalating violence in Karachi had claimed lives of about 300 innocent people during July. He said PTI condemned all the murders and demanded arrest of killers.Alvi criticised the political troika of Pakistan People’s Party (PPP), Muttahida Qaumi Movement (MQM) and Awami National Party (ANP). He alleged that although these parties were in a coalition at the top but the fact was that they were in a state of war, resulting in the murders of several innocent people on daily basis.

He said the Human Rights Commission of Pakistan’s report stated that while criminal elements may be exploiting the situation, they were definitely not the architects of the situation.“This is exactly what we have been saying. The parties involved are clearly MQM, ANP and PPP,” he alleged.PTI leader further said, “The people of the city are not fighting but the political parties and their armed wings are creating terror.

The political troika is responsible for creation of an atmosphere where innocent ethnicities have no choice but to align with these violent parties so as to get protection.”He said the solution to the city’s situation only lied in refraining politicisation of police, deweaponisation of the city, taking stern action against culprits without any favour or fear and surfacing their political affiliation. PTI leaders Naeemul Haq and Ashraf Qureshi were also present on the occasion. – Dailytimes