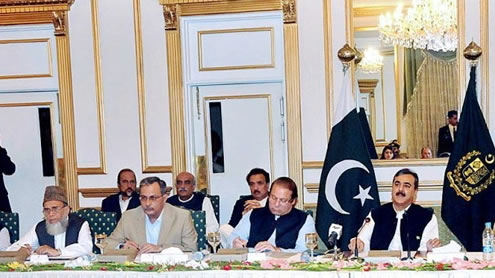 ISLAMABAD: The national political leadership has said that the All Parties Conference (APC) has sent a message across the globe that Pakistanis are united and will not compromise on national security at any cost. Commenting upon the outcome of APC late Thursday, Sheikh Rashid Ahmed of Awami Muslim League said that all the leaders has decided to stand with Pakistan Army and country’s security agencies. We all are unanimous that no one will be allowed to attack at country’s sovereignty, he added.He said the ISI chief stated that Pakistan has no link with the Haqqani network. He said participants of the meeting also demanded of the government to review country’s foreign policy.

The head of Pakistan Tehreek-i-Insaf Imran Khan said that he participated in the conference to show the world that Pakistanis are one on the issue of country’s defence and other important national matters. He said a Parliamentary Committee has been constituted to ensure implementation of ‘Joint Declaration’ and the resolution passed earlier by the Parliament for the security of the country. Talking to reporters, Opposition Leader in Senate and Leader of Jamiat Ulema Islam (JUI-F) Maulana Ghafoor Haidri said that the All Parties Conference (APC) Joint declaration will start a new era of change.

Terming the APC a historic initiative he said that joint declaration has been passed with consensus of all the political parties. Haidri also termed it a new national policy, adding that it will bring good results in the country as well as in the whole world. He said these decisions have been made with consensus of all the political leadership which is a great achievement. Ameer Jamat Islami (JI) Munawar Hasan has said that all the political parties have agreed on the joint declaration and it will be implemented with full spirit as implementation is very important.

Senior Vice President Pakistan Muslim League (Q) Ajmal Wazir Khan has termed it a good initiative, adding that it will be a clear message to the world that Pakistani nation is united and has one voice on the issues of national importance. He said that blame game is not acceptable to the nation.Chief of Sunni Ittehad Council, MNA Sahibzada Fazil Karim said that leaders of all political parties sat together on the issue of national security and country’s defence, which was appreciable. He said that now it is the responsibility of the government to ensure implementation on ‘Joint Declaration’ and Parliaments resolutions for country’s sovereignty.

He said the conference has sent a message to the world that despite all differences Pakistan’s political parties are unanimous upon the issue of national defence and security. President Nizam-e-Mustafa Party Haji Muhammad Hanif Tayyab Haji said that country’s political and religious parties have expressed their loyalty with the country and participated in the conference. He expressed the hope that the government would ensure implementation upon the Joint Declaration and Parliament’s resolutions for country’s security. – APP