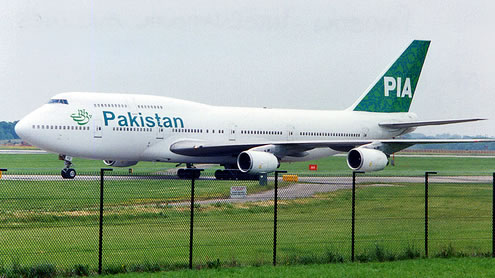 Secretary General to the President M. Salman Faruqui and Secretaries of Defence and Finance divisions were also present in the meeting along with other senior officials. Presidential Spokesperson Farhatullah Babar said that the special meeting had been convened in the backdrop of reports about the airline that suggested all was not well with it and called for toning up the organization. The President said that injecting more finances alone was not the answer. What we need in equal measure is the optimal utilization of financial, material and human resources as well as finding out of box solutions for renewal of the existing fleet, he added.

He said that a reform package was also necessary for safeguarding interests of the organization and its employees. The President said that timely replacement of the aging fleet with more modern and economical ones would not only reduce the operational costs but also ensure safety of the passengers.
Welcoming management’s initiative to separate non-core activities from the core business, the President said that such steps were urgently needed in order to ensure cost effectiveness of the business.

President Zardari during meeting also urged the management to ensure that the passengers’ complaints, if any, are properly addressed and that they are properly facilitated while travelling with PIA. MD PIA Capt. Nadeem Khan Yousafzai briefed the meeting about the organization and the steps taken to reform the organization. During later part of the meeting, DG Civil Aviation Authority Air Marshal (Retd) Khalid Chaudhary also briefed the President about performance of CAA (Civil Aviation Authority).

He informed that in order to promote aviation industry in Pakistan, a revised National Aviation Policy has been drafted. He said that recently International Civil Aviation Organization (ICAO) conducted extensive State audit of Pakistan from June 5th to 17th, 2011 and graded Pakistan at 82 per cent compliance level against the World’s average of 65 per cent. He also said that Safety Management System of CAA was recognized as one of the best in the world especially its drive for achievement of Integrated Management System was highly appreciated by ICAO auditors and experts. CAA has also been invited to assist ICAO in several disciplines, he added.

Air Marshal (Retd) Khalid Chaudhary said that various initiatives were being taken in the Airport Services Performance side in line with the current best prevalent practices. Revenue during financial year 2010-11 registered a 6.3 per cent increase over the last year and another increase of 4  is envisaged during next year, he said. He said that for the funding of ongoing mega projects, CAA was exploring the options of financing Rs 7.1 billion. The President was also briefed about progress on new Benazir Bhutto International Airport Islamabad. He called for early completion of the project. – APP

Political activities in Fata: Consultations for code of conduct soon