Political activities in Fata: Consultations for code of conduct soon

by Top
in Khyber Pakhtunkhwa, Pakistan
0 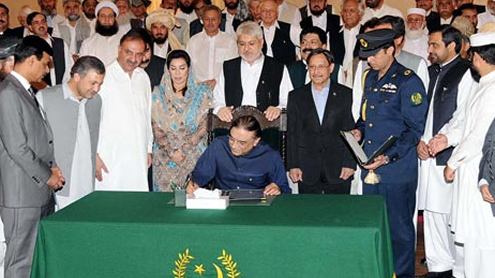 PESHAWAR: The government will soon start the process of consultation with all politicians and tribal elders for evolving a code of conduct for the political parties to ensure uninterrupted political activities in the Federally Administered Tribal Areas (Fata) in the light of the Political Parties Order 2002. Besides, the relevant authorities will speed up implementation of the reforms in the Frontier Crime Regulations (FCR). The decision to this effect was taken at a meeting chaired by Governor Barrister Masood Kausar at the Governor’s House here on Friday.

“To the outside world the Fata is a centre of gravity of militancy, but by implementing the reforms we will convert the tribal areas into a heaven of peace and prosperity,” the governor told the meeting, which was attended by Federal Minister Shaukatullah Khan, MNA Munir Orakzai, presidential spokesman Farhatullah Babar, secretary for states and frontier regions Habibullah Khan and additional chief secretary, Fata, Fazal Karim Khattak. The meeting empowered the governor to hold meetings with representatives of Fata lawyers, students, youth, journalists and notables belonging to all political persuasions to highlight the steps being taken to speed up implementation of the overall reform process.

The participants reviewed progress on establishing the Fata appellate authorities and Fata tribunal under the FCR reforms package and said that soon an independent judicial mechanism would be in place. They will also seek an appointment with President Asif Ali Zardari to seek his help and guidance in the implementation process. They also recommended that the Fata should be represented in the Inter-provincial Committee. The meeting was informed that Pakistan Broadcasting Corporation would set up six new radio stations in the tribal areas besides taking control of the four already working.

Speaking on the occasion, the governor said that the Fata reforms was a major step forward in bringing the tribal regions into the mainstream of national life and called upon all the stakeholders to join hands in this national effort. He said that speedy economic development of the Fata was the major priority of the government. He said that the situation in tribal areas was improving as evident from the opening of two cadet colleges in South Waziristan Agency. Mr Kausar stressed for creating awareness of the reforms among the tribesmen and urged the media to play its role in this regard. He said that data of the children and women detained under the FCR was being collected to review their cases in the light of reform.

The governor called upon the concerned state functionaries to assist in the early implementation of reforms. About reservations of some people that the reforms are too little, too late, the governor said: “We have opened the door that was shut for over a century. Let others now move and take the reform process forward instead of criticising us.” He praised President Zardari for his bold initiative of hosting over a hundred leading tribesmen from all the seven agencies for developing a consensus on the FCR reforms and his permission to political parties to function in tribal areas. – Dawn