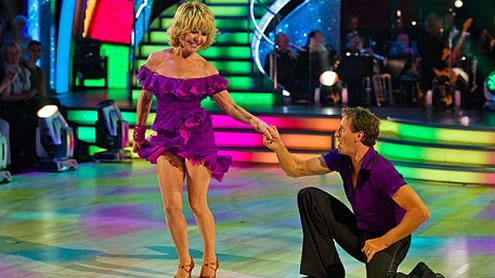 The Strictly Come Dancing glitterball swung back into action tonight, with the first half of its two-part series-opener. Ladies topped and propped up the leaderboard by the time the credits rolled. The most entertaining turn of the night, though, was without doubt astrologer Russell Grant, whose cha-cha-cha reached dizzy heights of camp even by Strictly standards. It’s been three weeks since the red carpet launch show, when the celebrities where paired with their professionals in a manner rather too reminiscent of a sequin-clad swinger’s night. The 14 couples have since been learning their waltz from their elbow and applying multiple coats of Cuprinol.

This weekend’s shows are purely a chance to see how good (or, let’s be honest, hopefully bad) this year’s intake are, with no elimination or public vote – although the judges’ scores will be carried over to next week. Tonight’s opener was also bafflingly scheduled, on air three hours later than the show normally goes out. An odd decision for what’s supposed to be a family show. Seven pairs took their first faltering steps onto the ballroom floor. The standout stars, tied at the top of the leaderboard, were Aussie actress Holly Valance after an impressively leggy cha-cha-cha and a woman twice her age: so-called “queen of the soaps” (even though she left EastEnders 24 years ago) Anita Dobson. Her poised, romantic waltz promised much – could she be the Pamela Stephenson of this series?

The two big men proved surprisingly twinkle-toed: cheeky Daybreak presenter Dan Lobb and hulking boxer Audley Harrison both waltzed with aplomb, even if they were a tad wooden. – telegraph