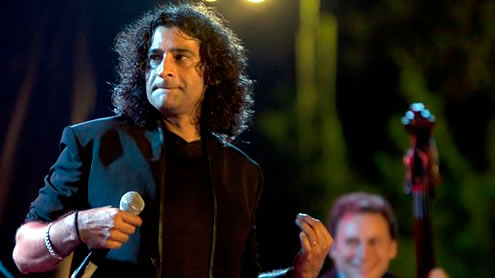 ISLAMABAD — Carrots haven’t worked with Pakistan. Neither have sticks. Now the US has enlisted the power of jazz music to improve relations with Pakistanis at a time when the important alliance has hit rock bottom. The Ari Roland Jazz Quartet certainly faced a daunting task. The US has spent billions of dollars over the past 10 years to win Pakistan’s support in fighting al-Qaida and Taliban militants and turn around rampant anti-American sentiment in the country. Now, Congress is threatening to cut off funding given the lack of results. The performances are part of a recent stepped-up effort by the US Embassy to sponsor cultural events in Pakistan. Already this year, an American director has staged Neil Simon’s play “The Odd Couple.” The embassy also plans to bring over a country rock band and a hip hop group as well as American documentary filmmakers who will give workshops to Pakistanis.

The jazz quartet from New York City arrived in Pakistan about two weeks ago for a series of concerts and music classes with local musicians. The trip culminated with a live recording of a “friendship song” with a Pakistani rock band during a concert Tuesday night. But relations between the two countries have been anything but friendly during their trip. Only two days before the musicians got here, militants fired rocket-propelled grenades and assault rifles at the US Embassy and NATO headquarters in Afghanistan, killing seven Afghans in an attack that the top US military officer said was carried out by fighters supported by Pakistan’s main spy agency. Adm. Mike Mullen, chairman of the Joint Chiefs of Staff, also blamed the Inter-Services Intelligence agency for helping militants from the Pakistan-based Haqqani network who carried out a recent truck bombing in Afghanistan that wounded 77 American soldiers.

Pakistan’s leaders have lashed out in response, warning the US that the allegations in Washington could destroy the alliance between the two countries. The accusations have also sparked a fresh wave of anti-American anger in the local media and among ordinary Pakistanis. Talk about a tough audience for a music group. But Ari Roland, an energetic double bass player, and his band members, two saxophonists and a drummer, didn’t show any hesitation when they took the stage in front of several hundred people seated in a small outdoor auditorium in Pakistan’s capital, Islamabad. Mostly dressed in suits and ties, the band played several jazz standards, such as Louis Armstrong’s “What a Wonderful World” and George Gershwin’s “Summertime.” They also invited a Pakistani musician onstage who played tabla, traditional percussion instruments that look like bongo drums.

The crowd cheered as the tabla player accompanied them on several Pakistani songs, his fingers flying up and down like pistons over the drums. The energy hit its peak as the crowd sang along to “Jazba-e-Junoon,” or “Spirit of Passion,” a patriotic song by the Pakistani rock band Junoon. There was plenty of bilateral good cheer, but the group’s performances, which also took place in the cities of Karachi and Lahore, will likely do little to win over Pakistanis. The crowds have been small and largely made up of elite Pakistanis who are more likely to have positive attitudes toward the US Across the country, only 12 percent of Pakistanis have a favorable view of the U.S., and 69 percent see the country as an enemy, according to a poll this year by the U.S.-based Pew Research Center. The poll had a margin of error of plus or minus 4 percentage points.

Attitudes haven’t improved even though the US has given Pakistan roughly $20 billion in military over the past 10 years and has pledged $7.5 billion in economic aid to help build things like schools, hospitals and power plants. Momentum to cut off or reduce funding began growing this year following the covert US raid that killed al-Qaida leader Osama bin Laden in a garrison town not far from Islamabad. Bin Laden’s hiding place sparked suspicions among many US officials even though the government hasn’t found evidence that senior Pakistani leaders knew he was there. The Pakistani government was outraged by the May 2 operation because it wasn’t told about it beforehand.

Relations plunged to a new low following Mullen’s allegations about Pakistan’s spy agency helping the Haqqani network. The US has long accused the ISI of having ties to the group, which is based in Pakistan’s North Waziristan tribal area, but this was the first time officials publicly linked the agency to attacks against Americans. The US has repeatedly demanded that Pakistan attack Haqqani fighters, but the government has refused, saying its troops are stretched too thin by operations in other parts of the tribal region. Many analysts believe, however, that Pakistan wants to remain on good terms with the group because it could be a useful ally in Afghanistan after foreign forces withdraw.

Despite the larger issues at stake, US officials present at the concert Tuesday night expressed hope in the power of music, especially the “friendship song” that the jazz band recorded with the Pakistani rock group, Fuzon. The song is “something that I think will guide us as we go forward and something that I hope will provide a path for Americans and Pakistanis to continue working together and creating wonderful things together,” said Mark Davidson, a senior public affairs official at the US Embassy. Fuzon’s lead singer, Rameez Mukhtar, said the song was called “Friendship is Life and Life is Beautiful.”

“Let’s talk. Replace the face of hatred with a new face,” sang Mukhtar in Urdu. “Shun differences, cut distances … let’s light the lamp of friendship.” Mazhar Hussain, a 40-year-old media professional who attended the concert, said it represented the kind of ties the two countries should foster. “This is what we need to carry forward, not just arguments with each other about fighting a proxy war,” said Hussain. “It needs to be a lasting relationship.” – Khaleejtimes