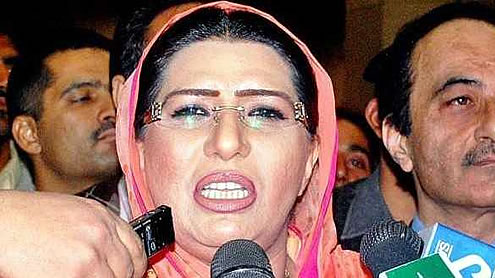 SIALKOT: Minister for Information and Broadcasting Dr. Firdous Ashiq Awan on Sunday said an Energy Conference is being held on Monday in Islamabad to formulate a strategy for getting rid of power loadshedding. Chief Ministers of Sindh, Punjab, Balochistan and Khyber-PK, Ministers and institutions concerned will attend the Energy Conference, she added. Taking to media persons here, she said : “Provinces are fully authorized to initiate electricity generation projects and it is high time that the provincial governments played their due role in starting power generation projects”.

Dr Firdous said to monitor the implementation of the All Parties Conference (APC) resolution, a Committee would be constituted with consultation of the political parties. The Committee will be constituted during the National Assembly session, she added. She said unanimous approval of the APC resolution would be supportive in strengthening the country on internal and external fronts besides safeguarding its sovereignty. The participation of all political parties indicated that the people were united on national issues, she added. She said the APC gave a clear message to the world that the Pakistani nation as well as political parties were unanimous on national issues. It also provided an opportunity to the country’s leadership to highlight the stance of Pakistan at international level, she added.

About the role of media, she said it served as a bridge between politicians and people. Besides, media reports were also helpful in taking decisions by the government on national issue, she added. Dr Firdous stressed media to work for bringing about radical changes in the thinking of society. “The duty of journalists is to base their reports on facts, without any fear and pressure and if it feels pressure, the media will face decline,” she added.

The Minister said healthy and impartial criticism could guide the government and political leaders to transform their viewpoint on any issue. “In a fast-changing situation around the globe, journalists should work in a respectable way by using their energies to cope with new challenges”, she said. She said she was optimistic that the journalist community and Sialkot Press Club will play their role in bringing about a positive change in the thinking of people of Sialkot. “Without changing the state of mind, we cannot achieve desired goals”, she added. The Minister urged the journalist community to mobilize the general public, businessmen and philanthropists to donate generously to the Prime Minister’s Flood Relief Fund during telethon. – APP