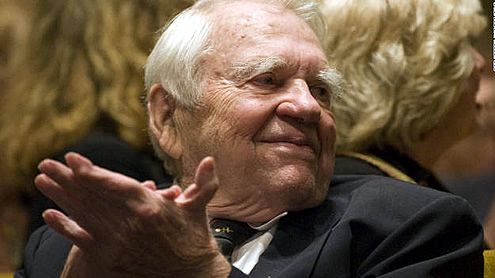 New York — Legendary and curmudgeonly TV commentator Andy Rooney offered his final remarks Sunday on the news show “60 Minutes,” capping a career that has spanned more than six decades. In his final essay, delivered around 8:15 p.m., Rooney said, “This is a moment I have dreaded. “I wish I could do this forever. But I can’t,” he said. “But I’m not retiring. Writers don’t retire, and I’ll always be a writer.”

CBS announced Tuesday that the upcoming program, five days later, would be the last one for the 92-year-old award-winning writer, essayist and commentator. He has been with the network — first as a writer for “Arthur Godfrey’s Talent Scouts” — since 1949, and been part of the “60 Minutes” crew since 1978. “There’s nobody like Andy, and there never will be. He’ll hate hearing this, but he’s an American original,” CBS News Chairman Jeff Fager said in a release announcing Rooney’s exit. The original essay offered Sunday was Rooney’s 1,097th for the program.

In it, he described himself simply, not as a “television personality,” but rather as “a writer who reads what he’s written.” “A writer’s job is to tell the truth,” he said. “I know I’ve been terribly wrong sometimes, but I think I’ve been right more than I’ve been wrong.” Earlier in the show, Morley Safer — himself an 89-year-old journalist and a “60 Minutes” staple since 1970 — interviewed Rooney about his personal and professional life. Rooney attended Colgate University until he was drafted into the Army in 1941. In February 1943, he was one of six correspondents who flew with the 8th Air Force on the first American bombing raid over Germany. Last year, Rooney received the Overseas Press Club of America President’s Award for these reports.

The television commentator admitted Sunday that he doesn’t sign autographs and rarely responds to fan mail, telling Safer he didn’t “want to answer an idiot who would have the bad sense to write me a letter.” Rooney has also engendered controversy, such as his weekslong suspension in 1990 from “60 Minutes” for remarks that offended some gay viewers. But he’s better known for his sharp commentaries and public persona as someone fed up with everything from desk clutter to chocolate chip cookies to door knobs. In his time at “60 Minutes,” Rooney also has contributed many deeper pieces in the wake of events like the 1986 space shuttle Challenger explosion, the 1995 Oklahoma City bombing and the “shock and awe” campaign to start the 2003 Iraq war — a phrase he scathingly said “makes us look like foolish braggarts.”

Safer described his longtime colleague as “America’s favorite grouch-in-chief,” saying Rooney used his “loud whiny voice … speaking up for citizens fed up with everything.” “There have been many curmudgeons on television over its long history,” Safer said affectionately. “None has been so long serving in that role as Mr. Rooney.” – cnn