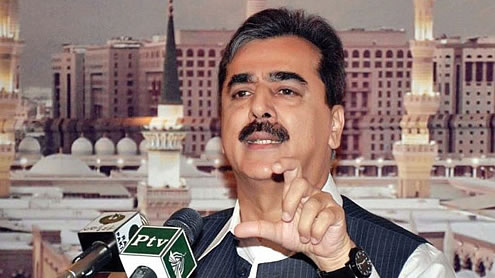 LAHORE: Prime Minister Syed Yusuf Raza Gilani on Sunday called on Afghan President Hamid Karzai to beware of common enemies and join hands for durable peace in the region.“Certain forces are at work to destabilise Afghanistan and President Karzai should not play in their hands. Instead we should get united to foil their machinations”, he said while talking to journalists at his residence here. Prime Minister Gilani said peace, prosperity, sovereignty, stability and independence of Afghanistan were the priorities of Pakistan Government. The Interior Ministry has assured full cooperation to Afghanistan in all matters, he added.

He said Pakistan was both strategically and geographically important for Afghanistan as it wanted a lasting peace in the neighbouring country. Referring to the country’s nuclear assets, he said they were in safe hands under an organised control and command system and the fact had been duly acknowledged by the United States on various occasions. “Pakistan’s defence is in safe hands but we show a responsible response as a nuclear nation to others”, the Prime Minister stressed.With reference to the demands of PML-N chief Nawaz Sharif regarding Pak-US agreement, Gilani said the coalition government had not signed any covert agreement with the US government vis-a-vis the fight against terror. The Pakistan Muslim League-N (PML-N) also remained part of the coalition set-up, he added.

Regarding Mike Mullen’s statements, the Prime Minister said the United States (US) government had recently assured Pakistan to respect its territory at all costs and not to repeat unilateral actions like Abbottabad and added that Mullen’s statements carried no weight.

Regarding the estranged relations after Raymond Davis issue, he said Pakistan had taken a principled stand on the issue and showed its resentment, adding that confidence building measures were underway to normalise relations between the two countries. To a query, the Prime Minister said Pakistan wanted to maintain congenial relations with the US without compromising its national interests. Regarding national consensus at All Parties Conference (APC), he said that all political parties should unite on all national issues. The APC has helped arouse nationhood and improved Pakistan’s image among the comity of nations, he added.

Gilani said all political parties, including those which did not take part in the 2008 general elections or did not get representation in the assembly, evolved national consensus on important issues by setting aside their differences, adding that the success of APC had dispelled the impression that the civilian government did not have control over military establishment. Stressing that evolving consensus on all major issues inside and outside the parliament was the top agenda of the government, the Prime Minister said all political parties from all the provinces, including Balochistan, attended the APC. Talking about the recommendations of APC regarding dialgoue, Gilani said the government believed in adopting the path of peace and dialogue and recalled that the government had initiated dialogue with Maulvi Fazal Ullah in Swat before resorting to deterrence. He said the government pursued the the 3Ds policy of dialogue, development and deterrence.

About current spell of loadshedding in the country, the Prime Minister said an Energy Conference had been convened in Islamabad on Monday, where all issues would be discussed by the stake-holders. “The load-shedding increased recently after hydel generation was affected due to stoppage of water to Punjab and Sindh in the aftermath of flood water,” he added. Critical of the unscheduled loadshedding, Gilani stressed the need for scheduled power loadshedding in the country so that people could adjust their life-style accordingly, adding the problem arose when people had to face unscheduled electricity outages. Enumerating his government’s achievements, the Prime Minister said 3000 MW electricity had been added to the national grid and the projects of the same magnitude were in the pipeline, adding his government was committed to make the country self-sufficient in energy.

To a query, he dispelled the impression that Punjab and Lahore were being discriminated against vis-a-vis load-shedding schedule, saying that he himself belonged to Punjab. Regarding a court verdict in the murder case of former Punjab Governor Salman Taseer, he said the PPP respected judiciary. When asked about improving Pakistan Railways’s performance, the Prime Minister said Railways was one of the eight public sector organizations which would be restructured. The restructuring of Railways was important to bring it out of the present chaos, he added.

Gilani said a cabinet committee headed by Governor State Bank of Pakistan had been constituted to present its recommendations on the restructuring of Pakistan Railways. About his viewpoint on the deprivations of Southern Punjab, he said that the area had been a victim of neglect during the past 64 years and its people wanted grant of rights so that their deprivations could be alleviated.