Pakistan can emerge as tourist spot 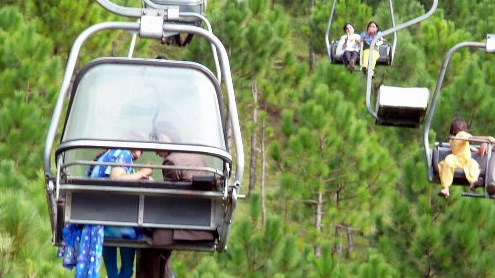 ISLAMABAD – Festivities held in connection with World Tourism Day last week rein kindled hopes for Pakistan to once again emerge as a tourist spot, attracting people from across the world. Fabulous destinations that once remained crowded by tourists, mostly foreigners, wear deserted looks even during the peak of season. However, there still exist a hope and a window of opportunity to win the bygone glory of Pakistan’s fascinating tourism industry. Managing Director of Pakistan Tourism Development Corporation (PTDC) said that tourism in Pakistan has the capacity to address issues related to tourism industry in the country. Managing Director Mir Shahjahan Khetran expressed firm resolve to promote the tourism potential of the country, which will help build better understanding of true image as a peace-loving country. Mir Shahjahan said that tourism opens ways for meeting with people of diverse cultures, regions and anthropological richness.

“As an industry it can contribute to poverty eradication, creation of jobs and a dimension in the creation of much needed social harmony,” he said. Festivities that were held across the country to celebrate the World Tourism Day have underlined to use this crucial sector for attaining national harmony and progress. Tourism is one of the largest revenue generating industries worldwide and the second biggest in Malaysia after manufacturing, however, its share in Pakistan’s economy has not reached the level where it ought to be. Tourism could be served as a vital tool through which national harmony and progress could be achieved, said the MD. Khetran said tourism could also play a vital role in socio-economic development of the country. He also underlined the need for promoting Pakistani culture and tourism at international level to attract foreign tourists.

He added that PTDC is promoting tourism infrastructure in far flung areas of the country. The corporation has provided a platform to tourism stakeholder for promotion of tourism business. He said through coordinated efforts, domestic tourism has been increased manifolds during the previous three years. Ayaz Shigri, Vice President, Pakistan Association of Tour Operators (PATO), said Gilgit-Baltistan has enormous potential for adventure and nature loving domestic and foreign tourists. Government’s support is essential for development of tourism infrastructure in the country. He highlighted the need for better coordination among provincial and federal tourism organizations, so that the common goal of supporting Pakistan’s national economy can be achieved. He appreciated the PTDC played during the last four decades in introducing country’s natural, cultural and adventure tourist attractions.

Mian Attique-ur-Rehman, Acting President, Rawalpindi Chambers of Commerce and Industry/Pakistan Hotels Association said the Federal Government should retain an organization like PTDC at Federal level for regulation and promotion of tourism on national and global level. Aftab-ur-Rehman Rana, President, Sustainable Tourism Organization highlighted the importance of preservation of natural and scenic beauty through sustainable tourism development. He said it is national duty to preserve natural environment and cultural heritage so the next generations can also enjoy the beauty of the country. He emphasized the role of civil society, youth and students in preserving natural and cultural heritage. Yasir Ilyas Khan, Chief Executive Officer, Tourism For Life called for taking skill development initiatives for youth, who accounted for country’s 60% population. – Nation