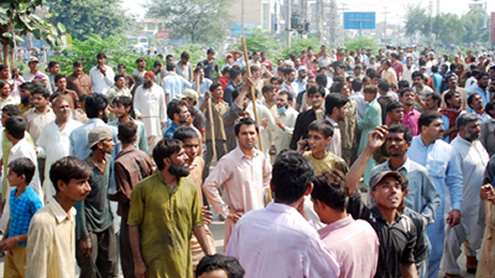 SIALKOT: Sialkot Chamber of Commerce and Industry (SCCI) along with other sister organizations strongly condemned the unscheduled 20 to 22 hours power outage that led the industrial wheel almost to a standstill. They have termed the situation worst, saying that the government has forced the Sialkot exporters, industrialists and traders to come on the roads to protest against unabated power cuts. Talking to the media, President SCCI Naeem Anwar Qureshi expressed grave concern over the situation, adding that daily 20 hours of power outages have crippled the industrial activity and the export industry of Sialkot is on the verge of collapse.

They said that putting aside appeals by the perturbed business community, GEPCO, today stepped up the duration of unscheduled power outages from 20 to 22 hours in the export-oriented city, due to which 80 percent industrial production in factories has been halted, adding that the energy crisis is becoming worse every day due to which industries are suffering from heavy financial losses, besides rendering thousands of daily wage workers jobless. They warned that the Sialkot traders would not pay their electricity bills in protest, urging the concerned authorities to work on a war-footing basis to put an end to massive power outages, as its negligence is adding fuel to fire, besides mounting annoyance in the public.

“There is no let-up in 20 hours long power outages in Sialkot, due to which export orders worth millions of dollars were being cancelled, as they were unable to dispatch export consignments timely to their foreign destinations,” they maintained. It is pertinent to mention that as many as 2500 industrial workers and labourers staged a sit-in in Badiana-Chawinda, Pasrur tehsil to denounce prolonged power outages. The protesting workers and labourers blocked traffic on main Sialkot-Pasrur road and Pasrur-Chawinda road for about three hours by burning tyres. They also blocked these roads with trees to halt traffic.

The protesting workers, who were armed with bricks, wooden sticks and hockey sticks, turned violent and broke the glasses and wind screens of several vehicles and beat up several people up badly injuring eight persons in the process. Police used tear gas to disperse the protesters. – Brecorder