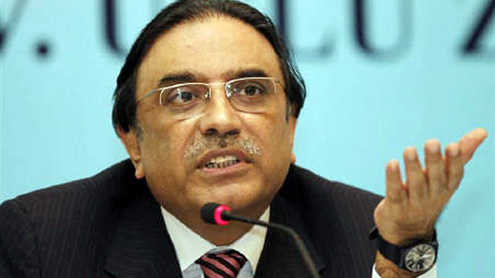 ISLAMABAD: More than 300,000 tents have been distributed till date among the flood affected persons in various parts of Sindh province. This was informed during a video conference meeting held at a special flood control room of the Presidency here on Monday, where President Asif Ali Zardari inspected various flood affected districts of Sindh, including those of Sanghar, Mirpurkhas, Tharparkar and Umerkot. The President interacted with government officials concerned and elected representatives of these districts through satellite video conferencing facility for an update on the relief activities for the flood affected people of Sindh.

Spokesperson to the President Farhatullah Babar said that during video conferencing, the President was informed that over 31,000 tents have been distributed in Mirpurkhas alone along with over 300,000 family packs, 23,000 blankets, nearly 800 water purification units and three dewatering pumps along with other supplies, including drinking water, mosquito nets and food items. In Sanghar, over 35,000 tents, 241,000 family packs, six dewatering pumps and other food items and commodities have been provided. In Badin, over 43,000 tents, 500,000 family packs, 1751 water purification units, 10 dewatering pumps and nearly 16,000 mosquito nets have been distributed so far. He said that during last video conferencing held on September 28, the President had directed the officials concerned that each and every detail of the losses and damages occurred and relief provided till date be provided to him.

He had also directed the Sindh authorities to keep eye on food and other supplies for the affected people and that all the procurement orders for the flood victims be made public through internet, the Spokesperson said. During previous video conference, the President had directed Member Water & Power, Secretary Irrigation Sindh and former Secretary Irrigation to meet and work out plan to address the issue of rain water accumulation in various areas of Sindh, including those of Mirpurkhas, Umerkot, Tharparkar and Benazirabad districts. The President was briefed about the implementation of his directives and the steps taken for dewatering of the stagnant water from various localities. Farhatullah Babar said the President directed the Sindh Chief Minister, who was also participating in the video conferencing, that army’s assistance should also be sought in dewatering activities and ‘Pakistan Cards’ be distributed with the help of Rangers.

The President during the meeting, directed that permanent drainage plan be also chalked out as incessant rains and consequential floods may recur due to climatic change. During interaction with the district coordination offficers concerned and elected representatives, the President inquired about health facilities and situation of food supplies in the affected areas along with preventive measures being taken to prevent outbreak of Hepatitis, Dengue fever and other diseases. The President inquired about need assessment and supply position of various commodities in the affected areas of Sindh. He also directed the officials concerned to make sure that all segments of society are equally treated during relief activities and the relief work is responsive to the needs of vulnerable sections including women, children and aged people. – APP

Protests against Wall Street Spread across US