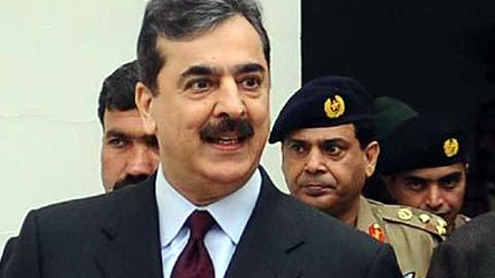 ISLAMABAD: Prime Minister Syed Yusuf Raza Gilani directed Interior and Law ministries to propose comprehensive amendments in Anti-Terrorism Act 2010 with a view to award detrimental punishment to those who are involved in heinous crimes like terrorism. The Prime Minister said this while chairing a meeting here at Prime Minister House on Tuesday. Prime Minister Gilani said that the present law is not offering an effective regime to deter criminals who get scott free due to legal lacunas. The rate of conviction is terribly low that embolden the criminals to revert to their abhorrent activities against society and state, he added.

Earlier, Interior Minister Abdul Rehman Malik briefed the meeting about the necessity of bringing amendments in Anti-Terrorism Act and argued that the country needs such stringent amendments because the country is in a situation that warrants special laws to deal with. In the meeting, various proposals forwarded by the Ministry of Interior and Ministry of Law and experts in criminal law came under discussion. The Prime Minister directed that all stakeholders should be on board while proposing amendments in the Act because element of effectiveness  is critical to frustrate designs of those who are up against the society and its way of life. They would not be allowed to hold the society as hostage at gunpoint, the Prime Minister assured. The meeting was attended by Federal Minister for Law Maula Bux Chandio, Attorney General and secretaries of the ministries and senior officials. – APP