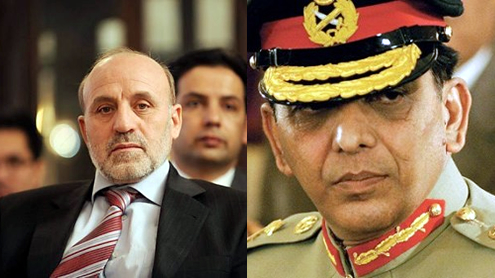 RAWALPINDI: Afghanistan Ambassador in Pakistan Mohammad Umer Daudzai held an important meeting with Chief of Army Staff General Ashfaq Pervaiz Kayani here on Wednesday. Reliable sources said that the Ambassador left for Kabul shortly after the meeting. According to sources, the meeting was an effort to do away with misunderstandings leading to a blame game in the region. The sources underlined the importance of the meeting that fell in the backdrop of Afghan President Hamid Karzai’s visit to New Delhi and signing of strategic partnership agreement with India.

When Director General (DG) of Inter Services Public Relations (ISPR) Major General Athar Abbas was contacted in this regard, he denied the meeting between the Ambassador and COAS. “No such meeting took place on Wednesday,” he added. – onlinenews

Sit in by PML(N) outside Presidency today