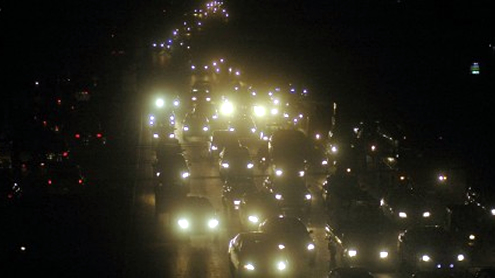 Lahore – After giving a one day relief to the people, the Pakistan Electric Power Company (PEPCO) started 12 hours load shedding in the city, once again leaving the consumers in trouble. PEPCO Managing Director (MD) Rasul Khan Mehsud tried to hide the reality by giving a false statement of reduction in load shedding and bringing down the duration to seven to eight hours, whereas, consumers faced outages of more than 12 hours in urban areas and more than 15 hours in rural areas. The city observed a pleasant day on Tuesday, as power supply to majority parts of the city remained smooth but once again on Wednesday, PEPCO tested the patience of people by closing electricity continuously.

PEPCO officials cleverly deceived the people by giving a load shedding plan of closing electricity for one hour and restoring it for one hour. This schedule took the duration of load shedding only in urban areas to 12 hours and more than 15 hours in rural areas. Every part of the city including Cantt, WAPDA Town, Johar Town, Township, Mughalpura, Shadbagh, Wahdat Road, Muslim Town, Garden Town, Green Town, Model Town, Gulberg and other areas faced minimum 12 hours of load shedding.

An official of the Lahore Electric Supply Company (LESCO) told Pakistan Today that PEPCO issued a plan of closing electricity for one hour after every hour. “In this way, the load shedding duration is 12 hours in 90 percent of the city,” he said, adding in this way neither people get angry nor do they come on streets. He said that some parts of the city faced even more than 12 hours of closure. “PEPCO devised the plan very intelligently and tried to kill two birds with one stone. “There have been no protests in the city despite 12 hours of load shedding,” he added.

Consumers said they were still happy, as at least they getting supply of electricity. “This one hour of load shedding after every hour is better than five hours consecutive closure,” consumer Farhat Hussain said, adding at least this closure is not disturbing routine life drastically. Some consumers said that they were paying for electricity and give utility bills regularly but even then there was no relief for them. – Pakistantoday