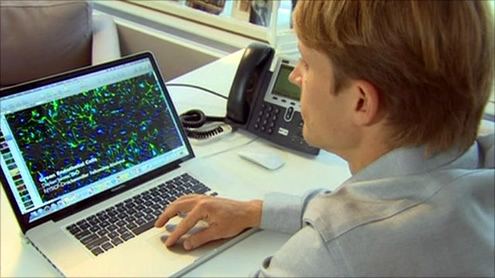 A form of cloning has been used to create personalised embryonic stem cells in humans, say researchers. Genetic material was taken from an adult skin cell and transferred into a human egg. This was grown to produce an early embryo. Stem cells have huge potential in medicine as they can transform into any other cell type in the body. However, the stem cells formed contained chromosomes from both the adult and the egg cells. The technique used – somatic cell nuclear transfer – shot to fame in 1997 when Dolly the sheep, the first mammal to be cloned from an adult cell, was unveiled to the world.

A South Korean scientist, Hwang Woo-suk, had claimed to have created stem cells from cloned human embryos, but was found to have faked the evidence. The lead researcher at the New York Stem Cell Foundation Laboratory, Dr Dieter Egli, said there was “a great question mark” about whether the cloning technique could be reliably used in humans.  e said other “groups had tried before, but failed”. Writing in the journal Nature, he said his group had also failed using traditional techniques. When they removed the genetic material from the egg and replaced it with the chromosomes from a skin cell, the egg divided but failed to go past the 6-12 cell stage. However, when they left the egg’s own genetic material in place and added the skin chromosomes, the egg developed. It reached the blastocyst stage, which can contain up to 100 cells and is the usual source of embryonic stem cells.

Eggs and sperm both have one set of chromosomes, which combined means adults have two copies of each chromosome. In this technique the two adult copies are added to the single copy in the egg meaning a total of three, which can be problematic. Often embryos without the correct number of chromosomes do not develop at all. Down’s syndrome is caused by three copies of just one chromosome. Researchers will need to produce embryonic cells which have only donor DNA, however, once the egg starts to divide the chromosomes are combined in the nucleus and would be near impossible to separate.

Dr Egli told the BBC: “The cells we have made are not yet for therapeutic use. There is clearly more work to be done, this is early days. “We see this as a step on that road, so now we do know that a human egg can turn an adult specialised cell, such as a skin cell, into a stem cell.” Prof Mary Herbert, from the Institute for Ageing and Health at Newcastle University, said: “This study shows that the conventional approach to somatic cell nuclear transfer is inefficient in humans. “However, the authors were able to increase the efficiency by leaving the host oocyte [egg] genome in place. “While this approach does not in itself provide a solution, it takes us a step closer to understanding where the problems lie.”

Recently a different route to stem cells has been used. Instead of using an egg, a chemical bath “reprogrammes” an adult cell into a stem cell. While this is seen as more ethical, there are concerns about whether such cells could be used therapeutically. There are differences between embryonic and “induced” stem cells, with the latter being more prone to expressing cancer causing genes. Prof Robin Lovell-Badge, from the UK National Institute for Medical Research, said: “This paper will be seen as significant both by those who are trying to use somatic cell nuclear transfer to produce human patient-specific embryonic stem cell lines and by those who oppose human ‘cloning’ experiments.” – bbc