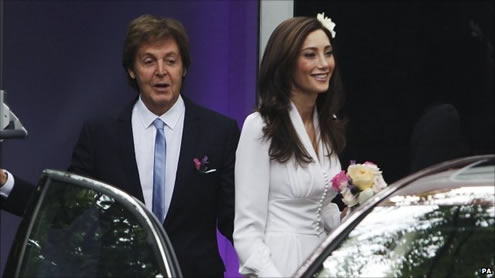 Former Beatle Sir Paul McCartney has married American heiress Nancy Shevell at a ceremony in London.The couple posed for pictures outside Old Marylebone Town Hall register office after being showered with confetti by wedding guests.Ms Shevell, 51, from New York, is an heiress to a haulage fortune.She is Sir Paul’s third wife after Linda McCartney died in 1998 and he split from second wife Heather Mills in an acrimonious divorce in 2008.Ms Shevell wore a white, long-sleeved dress and held a bouquet of roses, while the former Beatle wore a dark suit with a white shirt and pale blue tie for the occasion.Hundreds of fans gathered outside the central London register office to see the couple arrive and depart from their wedding ceremony, and barricades were erected.

A large group of journalists and photographers also waited for several hours before the newlyweds finally emerged.The wedding party spent more than an hour inside the venue before emerging on the steps of the building.The couple then returned to their home in St John’s Wood, London, for a reception with family and close friends.When asked how he felt after tying the knot for a third time, Sir Paul told waiting reporters: “Terrific, thank you. I feel married,” adding, “I feel absolutely wonderful.”James McCartney, Sir Paul’s son, was among the first to arrive for the party at the couple’s home on Sunday evening.

He was closely followed by the groom’s daughters Mary and Stella, who designed the bride’s gown.Ronnie Wood, of the Rolling Stones, said he wished the couple a “very happy future” as he entered the party.And Sir Paul’s former Beatles bandmate Ringo Starr, one of the last to arrive at around 1930 BST, said his message for the couple was “peace and love”.Ms Shevell, who was married for 20 years to American lawyer and political candidate Bruce Blakeman, became engaged to Sir Paul in May.The couple began dating four years ago in the upmarket Hamptons area of Long Island.

Life-long Beatles fan Chiara Amato said she had sat outside the register office every day since September 29 in anticipation of the couple’s wedding.She said: “This marriage is going to last. She seems to be really nice and deeply in love with him. I have been listening to The Beatles since I was six years old. I have been to see Sir Paul in concert 27 times.”Ms Shevell is a board member of New York’s transportation authority and vice-president of her family haulage firm.But the wedding is expected to mean an end to her work in the family business and her leaving her position on the board of the transportation body.