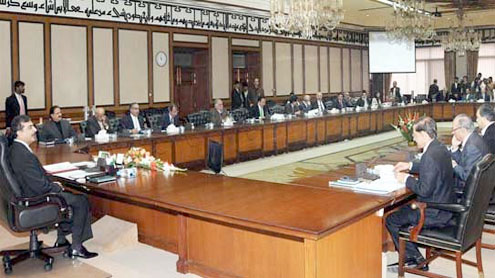 ISLAMABAD: Prime Minister Syed Yusuf Raza Gilani here on Wednesday directed that the decisions taken in the cabinet meeting be implemented without discrimination.

While addressing the cabinet meeting held under his chairmanship, the Prime Minister highly appreciated efforts of the High Powered Committee on Energy headed by Finance Minister Dr.  Abdul Hafeez Shaikh, which also included Minister for Water and Power Naveed Qamar, Minister for Petroleum Dr. Asim Hussain, Deputy Chairman Planning Commission and Governor State Bank of Pakistan.The Prime Minister said the cabinet would review the status of implementation of the decisions in its alternate meetings.

The Prime Minister said the committee held a series of meetings spread over more than one hundred hours to deliberate upon all aspects of power sector with a view to seeking short and long term solutions of the lingering problem, which badly affected the industry and daily routine of life.
The Prime Minister said it was only due to the in-depth introspection of the committee that the cabinet has taken such important decisions pertaining to conservation, distribution, power generation and above all restructuring of the power sector enabling it to become viable on sustainable basis. – APP