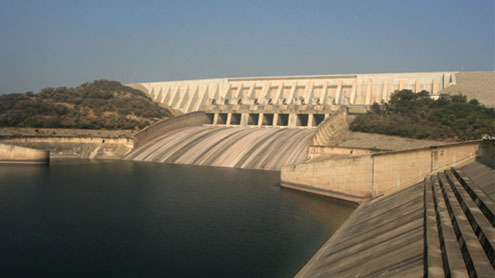 Prime Minister Gilani termed the project vital for national economic development and said it would go a long way in the progress and development of the country.He said in the past 35 years no such project for storage of water was implemented and said the upraising of dam would increase storage capacity and power generation significantly.PM Gilani lauded the government and private sector that helped completion of the project and said being an agricultural country, it was vital to increase the cultivated land to ensure food security.

He said it was also important to ensure better utilization of agricultural water through brick-lining of watercourses and called for utilization of drip irrigation and sprinklers to maximize usage of limited water for greater benefit.He said the government would soon inaugurate the Diamir Bhasha Dam which would store 6 million MAF water and produce 4500 mega watts of electricity.Prime Minister Gilani said the government has embarked upon a new vision of initiating water storage projects on smaller watercourses and rivers to ensure provision of irrigation water in far-flung areas.

The Prime Minister also thanked China for completion of the upraising project and termed it a contribution towards greener Pakistan. He particularly mentioned the officials of China International Water and Power Electric Company for completion of the project.He also announced a month’s salary for the WAPDA employees associated with the Mangla Dam Upraising Project.He also lauded the political leadership of Azad Jammu Kashmir government for standing united and working together for the development. He particularly mentioned that the past and present leadership of AJK was sitting together at the stage that spoke volumes of the commitment of the leadership to serve the masses.

Gilani said consistency in policies was critical for the development of the country. He said the government had the will to confront all challenges and had proven by its deeds that they were sincere in serving the masses.He said he could challenge that the pace of development during the present government out-paces any progress made by any other government in the past.The Prime Minister said he had directed that the projects that have been completed up to 60 per cent, under the PSDP, be completed on priority basis.He regretted that certain sections were in the habit of making tall claims, but there was nothing to prove it on the ground.

Minister for Water and Power Syed Naveed Qamar said Pakistan Peoples Party had always strived to provide the masses all facilities at their doorsteps and mentioned that the party founder Zulfikar Ali Bhutto had the honour of initiating the Mangla Dam Project.He regretted that the previous governments ignored the aspect of power generation that has led to the current situation where the demand has exceeded the generation capacity.