Hunting and Trade of Falcons continues unchecked in Pakhtoonkhwa 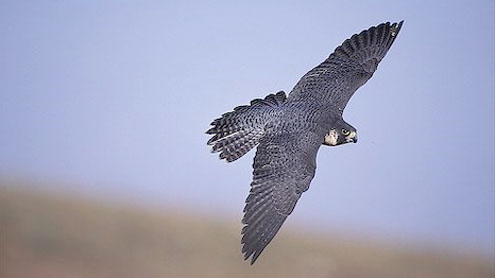 PESHAWAR: The illegal hunting, trade and possession of falcons continue unchecked in Khyber Pakhtunkhwa, as the wildlife department faces shortage of staff and other facilities, sources said.

“Only 450 field workers are not enough to stop illegal hunting and smuggling of falcons in the province. Each of the workers is required to cover on average 200 square kilometres area on foot while the trappers are sharp and have all the facilities,” a senior wildlife expert said. The federal government had banned falcon hunting in 2005.In order to regulate hunting and export of falcons, the provincial government framed rules in 1981 under which it earned Rs7 million a year in lieu of issuance of licences to hunters, dealers and exporters.

Falcon Sarkar, billed as fastest bird in the word, migrate to Pakistan from Siberia, Central Asian States, China and Afghanistan in winter and stay from September to December each year in the tribal belt, Khyber Pakhtunkhwa, Punjab and Balochistan, said the expert, adding that price of the bird ranged between Rs1 to Rs10million due to its demand in Arab countries.The Arabs bought falcons for using them for hunting birds, particularly houbara bustard, in other provinces of Pakistan.

The Convention on International Trade in Endangered Species (CITES) in Wild Fauna and Flora had declared falcon as endangered species in 2005 and asked its members countries, including Pakistan, to suspend its export permits.Consequently, the federal government banned falconry in August 2005 with a view to conserve the species by putting brakes on hunting and trade.

“The ban has been successful as far as increase in population of falcon is concerned. But still we have not increased the bird`s population to a desired level because of the inadequate manpower and limited financial resources required to effectively implement the ban,” a senior official of the Khyber Pakhtunkhwa Wild Life Department said.

He said that despite destruction of falcon habitats in the shape of bad law and order, degradation of environment, dwindling farming and deforestation, the province was presently home to about 8,000 falcons. He said that the falcon fed on mammals, birds, reptiles and insects.A divisional forest officer, Asad Lodhi, said that though declared endangered by CITES and vulnerable by the International Union for Conservation of Nature in Pakistan, the Khyber Pakhtunkhwa had been able to conserve falcons. – Dawn

GLEE FOR GLEESON AT THE HERO INDIAN OPEN

Parlimentary Defence Committee to be Briefed at Army Head Quarters(GHQ)

Parlimentary Defence Committee to be Briefed at Army Head Quarters(GHQ)