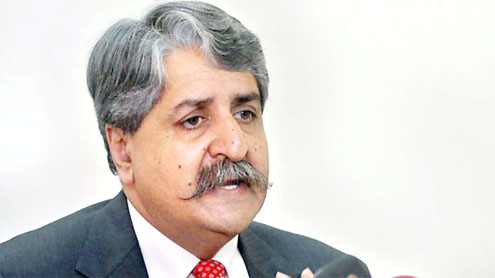 ISLAMABAD: To exploit the vast natural resources across the country and particularly in Balochistan, the people have to trust foreign investors or wait till local expertise are developed in the years to come.


Federal Minister for Water and Power Syed Naveed Qamar expressed these views on Thursday at a public seminar ‘Potential of Natural Resources and the Politics of Agreements in Balochistan’, organised by the Centre for Research and Security Studies (CRSS).The minister admitted there was mistrust among foreign investors, federal government and provincial governments and said till removal of this mistrust, it would be very difficult to exploit the wealth of natural resources particularly in Balochistan.

At present, Pakistan is unable to exploit fully Balochistan mineral resources and thus required foreign services and state of the art technology. “Historically we have not been in good terms with foreign investors on our land, and consequently this mistrust has also held back development.”He made clear we have two options right now: “Either we should trust the foreign investors or wait for generations until we develop indigenous expertise and technology to exploit our natural resources”.

“Rationally we should not shy away from asking foreign investors and experts to develop our natural resources for us”, he underscored. The federal government also hired consultants on various matters, where there is lack of proper skill.Hasil Bizenjo, Senior Vice President of National Party Balochistan claimed the rulers of Pakistan sitting in Islamabad believed they were the owner of natural wealth in the country and this thinking on the part of few people have made the country bleed for last 64 years.

He observed there was no law and order issue in Balochistan’s mining areas. He noted if even there was law and order situation across Balochistan today, then what about the last 60 years.He proposed federal government should leave the issue of natural resources’ exploration and development to the provincial government and it could better take of it.“It is very strange Pakistani government is over-relying over Chinese, and consequently Chinese believe now that development of natural resources in Pakistan is their right”, he added.

He made it clear the federal government made agreements with foreign countries, like Saindak, Reko Diq and others, which were in favour of foreign investors and totally ignored the interest of Balochistan.He stressed the need for renegotiations over such agreements particularly after the passage of 18th Amendment, which made provinces 50 percent owner of all mineral resources.

Other speakers underlined Balochistan needed more generous and just local and foreign investment to exploit the potential of natural resources to its fullest capacity. They said a comprehensive solution to the competing interests of all the stakeholders was the key to unleash the natural resources’ potential of the province. – Dailytimes