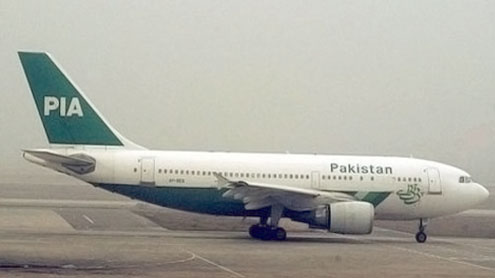 The revival plan of PIA includes purchase of 40 fuel-efficient new passenger aircraft to replace the aging fleet of the national carrier in the medium term plan, official sources added. Addition of new aircrafts will make airlines fuel-efficient and help eliminate fuel losses caused by old and aging PIA fleet at present, said the sources. CCOR constituted by the Prime Minister met on Thursday under the chairmanship of the Federal Minister for Finance and Economic Affairs Dr Abdul Hafeez Shaikh.

Official sources said that federal government would inject Rs20 billion into PIA in the shape of loan (Rs1 billion in 2011, Rs5 billion in 2012 and Rs14 billion would be provided to the national carrier in next phase). PIA would be required to pay 6 percent amount back out of the proposed cash injection loan amount, after financial stability, in each coming year.

The cash injection would be linked with strict accountability in performance and expenditure controls and federal government would be monitoring entire restructuring plan’s implementation in agreed phases and deviation would lead to action against management, explained the official sources.

It has been assured to the federal government that after strict implementation of restructuring plan, gap between expenditures and income of the national carrier would be bridged and it would stand on it’s own feet without further investment injection, added the official sources.

The PIA restructuring plan is aimed at reduction in cost of PIA operations in immediate terms and financial stability in medium terms. The meeting was informed that PIA was overloaded with staff and employees to a seat of aircraft ratio is over and above the international ratio. It was also informed that some 4,500 employees of PIA would be retiring from service within next four years and these vacant posts would not be filled and no fresh appointments would be made to make the national carrier’s employees strength justifiable, disclosed the official sources.

Sheikh observed that the losses to the airlines cannot be filled until the cost is controlled and in this regard he stated that the low cost passengers of the airlines is also the issue which is causing loss to the airlines. He stressed upon the revamping of the financial and operational sectors, which are needed to be identified and rectified. The meeting decided that the injection of finance in the airlines shall further be discussed in the coming meeting of the CCOR next week.

Federal Ministers for Petroleum and Natural Resources, Privatization, Defence and Secretaries of Finance and Defence along with Planning Commission Deputy Chairman and PIAC Managing Director and its financial and operational high officials attended the meeting. – Dailytimes

The plans of men