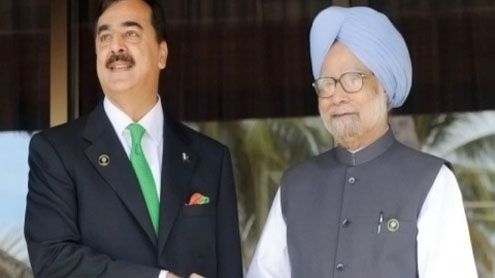 ADDU: Giving hope to their people, Pakistani Prime Minister Yousaf Raza Gilani and his Indian counterpart Dr Manmohan Singh, who met on the shores of the Indian Ocean against the picturesque Maldivian backdrop on Thursday, promised to write a new chapter in the history of their countries with a pledge to make the next round of talks even more productive.

The decision to take the bilateral engagement to a new level came in the third meeting between the two prime ministers in the last 18 months after their talks at the 2010 SAARC summit in Thimphu when they had decided to resume bilateral dialogue.Though they did not make any major announcement, Gilani and Singh opted to speak briefly without taking any questions from journalists. However, the unanimity of views was evident from the common expression they, first Gilani and then Singh, used in their respective statements.

“Our next round of talks will be more productive and we will open a new chapter in the history of our countries,” Prime Minister Gilani said after his one-hour one-on-one meeting with Prime Minister Singh, who also appeared equally optimistic as he called his counterpart “a man of peace” and said: “The destiny of our peoples is closely linked … we have wasted a lot of time in acrimonious debate … now a new chapter (in the history of both countries) will be written … we have agreed to discuss all issues which bedevilled our relations.”

Gilani said they reviewed the process of dialogue. “We are moving in a positive direction … we openly discussed all core issues,” he said, specifically mentioning the issues of Kashmir, water, terrorism, Siachen and Sir Creek. He said the foreign and interior ministers of both countries and secretaries of defence had already been involved in discussions to resolve the issues.The commerce secretaries are also scheduled to meet next week. As the two leaders hoped that the next round of dialogue would be more productive and constructive, Pakistan gave an assurance that it would send a judicial commission to India soon and the interior secretaries of Pakistan and India would discuss terrorism and security-related issues in New Delhi in December.

Following Pakistani cabinet’s endorsement of granting Most Favoured Nation (MFN) status to India, it is expected that both the countries would now work towards a preferential trade agreement (PTA). The PTA between the two countries, under the South Asia Free Trade Agreement (SAFTA), if finalised, would lead to zero Customs duty on all traded goods by 2016.The SAFTA is an agreement reached in the 2004 SAARC summit in Islamabad which created a free trade area of over 1.8 billion people in Pakistan, India, Bangladesh, Bhutan, Maldives, Nepal and Sri Lanka.

Both sides have already agreed that the joint commission, which held its last meeting in 2005, would be revived, visa liberalisation agreement would be signed at the earliest and the process to implement cross-Kashmir trade and travel would be put in the fast-track. Pakistani Foreign Minster Hina Rabbani Khar said the next round of talks would begin by the end of this month. “The process of trade normalisation will be taken to its logical conclusion and we would also move toward a preferential trade agreement with Pakistan…

and a liberalised visa regime,” Indian Foreign Secretary Ranjan Mathai told reporters, referring to visas for business people. However, Singh did not forget to tell Gilani that both countries had an obligation to ensure that terrorism did not spoil relations between them and pressed for justice for 26/11 victims. “Terrorism is a perennial concern. We have an obligation to ensure that it does not spoil relations between the two countries,” Foreign Secretary Mathai told reporters.Singh told Gilani that “it is imperative to bring the perpetrators of 26/11 attacks to justice”, Mathai said.

“The two leaders agreed that terrorism posed the most serious threat to peace and stability in the region,” he added. Mathai stressed that the talks signalled an end to the period of “accusations and counter-accusations” and stressed on key initiatives that emerged from the talks. “The joint commission, which have not met since 2005, will be revived,” he said. The liberalised visa regime should be signed at the earliest, Mathai said, adding that the two sides also decided to fast-track implementation of cross-border trade and confidence-building measures that were finalised during talks between the foreign ministers of the two countries in July. – PT

SAARC epitomises hopes and aspirations of people of the region

SAARC epitomises hopes and aspirations of people of the region