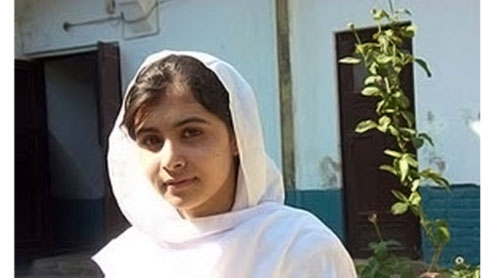 ISLAMABAD: A brave girl from Pakistan, who as an 11-year-old wrote about the Taliban banning girls’ schools in the picturesque Swat Valley and missing watching her favourite Indian serial ‘Raja Ki Ayegi Baraat’, has been nominated for the International Children’s Peace Prize.

Malala Yousufzai, now 13, was a victim of the ban imposed by the Taliban on education for girls in the troubled Swat Valley over two years ago. She wrote about her pain and anguish in a diary for BBC Urdu online.Yousufzai, a Class 8 student, beat 93 contestants from 42 countries to be nominated for the International Children’s Peace Prize 2011. The prize is due to be announced today and if she wins, she will be given the award by Nobel Peace Laureate Desmond Tutu.”I am very happy to be nominated along with four other brave girls. I am particularly inspired by Michaela who, despite her physical disability, fights for the rights of children with disabilities,” Yousufzai told the media.

Her classmates described her as a go-getter who usually bagged the first position in tests and led others in extra- curricular activities.Yousufzai said her nomination for the prize had “doubled her courage” as her cause is of great importance.”Irrespective of whether I win the prize, I will continue my struggle. I hope to set up a vocational institute for the marginalised girls of this area so they can stand on their feet in the future.”Asked why she started her campaign for girls’ rights, Yousufzai said the violence in Swat had “a huge impact” on her mind. She said she wanted the rest of the world to stop describing the people of Swat as terrorists as they were peaceful and loving.

In one of her very first diary pieces written on January 14, 2009 – just a day ahead of the Taliban enforcing their ban on education for girls – Yousufzai wrote: “I may not go to school again… The principal announced the (winter) vacations but did not mention the date the school was to reopen. This was the first time this has happened.”Her diary entries included discussions with classmates about the Taliban, who then controlled most of the Swat Valley and publicly executed dozens of people who opposed them.

In one entry, she described a “terrible dream” about military helicopters and the Taliban.She also wrote about Mullah Fazlullah, the leader of the Tehrik-e-Taliban Pakistan in Swat, who “cried” for a long time on his FM radio channel. “He was demanding an end to the military operation. He asked people not to migrate but instead return to their homes.”The Pakistan government sent the army into Swat to flush out the militants in early 2009 after Taliban began extending their influence to several districts located 100 km from Islamabad. Hundreds of Taliban fighters were captured or killed but most of the top commanders, including Fazlullah, managed to escape. – TOI