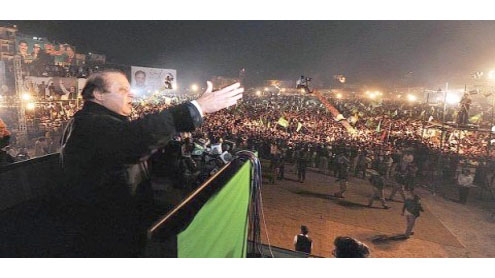 FAISALABAD: Pakistan Muslim League-Nawaz (PML-N) President Nawaz Sharif said at a huge public rally at Dhobi Ghaat here on Sunday that the party would no longer sit in the assemblies if an immediate enquiry was not launched into the memo controversy.

He condemned the memo, written to former US Joint Chiefs of Staff chairman Mike Mullen by Pakistani-American businessman Mansoor Ijaz allegedly on instructions from Pakistan Ambassador to the US Hussain Haqqani, saying selling off national sovereignty to foreigners was unacceptable and the government sought to put the army under US control. At a massive public gathering meant to refute the growing influence of the Pakistan Tehrik-e-Insaaf (PTI) in the erstwhile PML-N stronghold of Punjab, Nawaz demanded an enquiry into the memo controversy within nine days and, in the event of noncompliance, threatened to take the issue to the Supreme Court.

“We will file petitions from all provinces of Pakistan including Gilgit-Baltistan and I will personally go to the Supreme Court,” he said. “My verdict is that I am determined to safeguard the sovereignty of Pakistan.”Spelling out the salient features of the PML-N agenda, Nawaz said that after coming into power the PML-N would grant interest-free loans to the educated youth of the country to bring them into the national economic stream. He promised that skilled labourers would be facilitated by bank loans to start up their own industrial units. Nawaz said the PML-N would have brought an end to load shedding if it had come into power in the 2008 elections.

“Once our party comes into power again, we will create employment for the thousands of skilled workers driven out of their jobs because of the power crisis,” said Nawaz. The former prime minister dispelled the notion that his party was a ‘friendly opposition’, saying it walked out of the coalition government without hesitance when the mutual agreement was violated by President Asif Ali Zardari. He cited the examples of governor’s rule in Punjab and disqualification orders against him and Shahbaz Sharif by the Lahore High Court as the testimony of being a genuine opposition.A substantial part of his speech comprised the past achievements of the PML-N during the pre-Musharraf era.

Acknowledging the national spirit of party activists, he said: “Our enthusiasm and fervour will surely defeat those who are hell-bent on undermining Pakistan.” He said the nation had suffered many painful wounds such as poverty, inflation, unemployment, suicide bombings and bankruptcy of the industrial units.The Gross Domestic Product (GDP) was growing at 8 percent during his tenure, he said, which had now been reduced to a mere 2 percent. He said the dream of economic revolution in the country was aborted by former president Pervez Musharraf. Thousands of PML-N activists streamed into the Dhobi Ghaat ground in Faisalabad to attend the public gathering, an event that was being debated among political analysts as the PML-N’s show of strength.

Referring to PTI Chairman Imran Khan’s statement that he would “bowl out” both PPP and PML-N, Nisar said Imran should know a bowler could not take two wickets with one delivery. However, if the umpires were with Imran, he could take three wickets in a single delivery. Nisar repeatedly mentioned the “unseen forces” allegedly helping the PTI. He called Imran a bubble on the political waters of Pakistan and challenged him to take his asset declaration mantra to the Supreme Court if he was serious. – PT