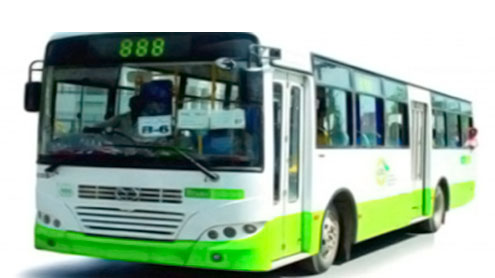 Such is the state of affairs in Pakistan that even a sincere public service decision can end up with an egg on its face.

With Lahore facing growing transport woes for its populace, the provincial government’s new CNG bus service became a victim of student hooliganism and mismanagement by the authorities.The Foton Bus Company (FBC) formally started its operations last week with 56 CNG-fitted buses on three routes of the city.The well-publicised ceremony was marked with the Chief Minister’s ride from his residence to his secretariat.Yet, on the practical front, the buses’ operation was delayed by a day since shockingly no one in the provincial cabinet or the Lahore Transport Company (LTC) thought of the weekly CNG holiday, which made it impossible for the buses to operate.

The next day, a group of rowdy students near the MAO College stopped the buses demanding a free ride while causing mayhem.The Chinese-owned company reacted by suspending its operations for five hours, while it informed the LTC.As of now, the company has decided not to operate its buses during peak school/colleges hours.It is unfortunate that both problems are being tackled with short-sightedness, besides the point that they should have been considered before launching the service.The FBC skirted the issue it faced by suspending its services during certain hours.The issue of the CNG holidays is hoped to be solved soon as the provincial government is negotiating with the federal government over providing CNG to the buses during the CNG holidays.

This reactive approach is indicative of a larger malaise plaguing our public transport system.The example of the FBC is not alone.At the time of independence, Pakistan inherited a strong railway network.Being the only mode of inter-city travel, the railway was the most popular and dominated all kinds of travel.In the earlier development plans, the then governments paid immense importance to rail transport and ensured investment in the railways while only a little over a quarter went into roads.However, over the decades, the balance of investment has gradually shifted heavily in favour of developing road networks while Pakistan Railways was left to wither away under its own weight of corruption and mismanagement.

It is unfortunate that intra-city mass transit systems such as the Karachi tramway, instead of being strengthened, were abolished later on in light of government negligence and managerial incompetence.Today, Pakistan Railways is also in tethers and the motorised public transport on the roads has been completely privatised.Yet even this privatisation has not been smooth as successive governments, especially since 1991, have formulated and implemented plans which have ultimately failed.The failure, in addition to their poor planning and myopic vision, was also because the next government had no interest in the previous one’s initiatives, preferring to write a new chapter itself instead of improving the one already written.

In recent years, there has been talk of intra-city rails in Karachi and Lahore but considering the disastrous implementation of the Rawalpindi-Islamabad mass transit project of 1996, which was based on a combination of road and railway mode, it is hard to be optimistic about the success of these projects.Unless the government, both at the federal and provincial level, realises that no public transport project can be successful until there is effective governance, such projects will continue to fall flat.It is an incorrect strategy to solely depend on the private sector for public transport systems; the public sector has set a stellar example of competence, professionalism and, most importantly, good governance in some departments such as the National Highway Authority (NHA).

Finally, reviving and establishing the railway and tramway systems will prove far more beneficial in terms of providing relief to the poor people, reducing air and noise pollution and easing congestion on the roads.India’s larger cities such as Delhi, Kolkata and Mumbai provide rail-based public transport thus lowering the usage of private vehicles.Such models can easily be adopted here.Instead of channelling almost the entire transport development budget on expanding roads, it would be wise for the government to also focus on developing institutional mechanisms necessary in developing public transport.Only then will the public transport system prove beneficial for those it is meant for – the public. – Brecorder