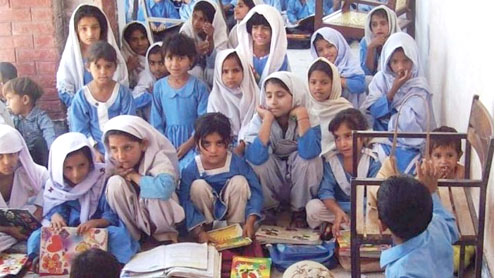 ISLAMABAD: Around 90% of girls in rural Balochistan are deprived of schooling, said rights activist, educationist and veteran politician Fazila Aliani.

A former member of the Public Service Commission, Aliani said that the insurgency is the key reason, while a lack of necessary funds, absence of a well-defined education policy, lack of girls’ schools, acute shortage of teaching staff, and poverty are other factors which contribute to the backwardness in her province.But Aliani, who has been struggling for women’s rights for around 40 years, is still optimistic about change in the “poor and pathetic state of affairs of Balochistan’s girls.”

Speaking to The Express Tribune, she said that except for provincial capital Quetta, educational institutions are non-existent in Baloch-dominated areas of the province. “You will not find any school from Mastung to Gwadar.”Most neglected parts of the province where Baloch girls are not educated are Buleda (Makran), Kharan , Bolan and Marri and Bugti tribal areas.“There are government-run primary schools in other parts of the province, but high schools have not been established so far. A primary level school that was established in the remote area of district Khuzdar at NAAL in 1975-76 is still not upgraded by the provincial government, despite repeated demands by the people.”

Bureaucratic hurdles and financial corruption are also other major factors that have destroyed the future of thousands of girls, Aliani said. “Many religious schools established in mosques and madrassas have filled the vacuum of schools, but such religious schools are only imparting religious education.”Aliani is also running a high school for underprivileged girls in Quetta. She does not agree with the notion that tribal sardars and nawabs are opposed to the establishment of educational institutions in Balochistan.

Some foreign countries are interested in helping build schools in the province, but their experts and diplomats are not being allowed by Islam­abad to visit Balochistan due to security concerns. “I was told by the ambassador of Norway that his country was interested to help the education sector in Balochistan, but authorities had denied him permission citing security problems.”She suggested that the Pakistan Army should expand its education network in the province. Army-run schools are providing better educational facilities in the most backward tribal areas of Marri, but the military should also set up schools in other parts of the province where non-Baloch teaching staff is not willing to serve.

“It is very unfortunate that most teachers of Punjabi origin are not willing to serve in the Baloch-populated districts of the province after the killing of several teachers by the insurgents during the past many years. – Thetribune