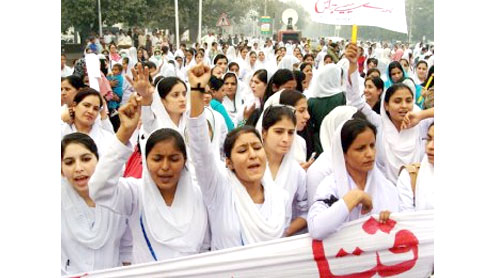 LAHORE: The Pakistan Muslim League-Nawaz (PML-N) unleashed its trader wing and police upon the nurses who were peacefully protesting against the injustices of the provincial government while demanding their rights on The Mall on Thursday.

The nurses had decided to take on the path of street agitation after none of the government authorities paid heed to their demands, including an increase in the salaries and other promises that the government had earlier said it would fulfil.The protest rally commenced from the Lahore Press Club in a very peaceful manner and reached the Punjab Assembly where the protesters started chanting slogans while demanding the government to fulfil its promises.

The protesters demanded presence of a senior government official for negotiations, however, Punjab Law Minister Rana Sanaullah refused to come out of his office, saying that he might see a few nurses in his chamber if they wanted to talk to him. The protesters were infuriated over the attitude and said they would continue with the protest on The Mall instead of meeting any of the government official or bureaucrats in their offices.In order to discourage the protesting nurses, the police authorities sent cops who started manhandling the nurses. They not only beat the nurses with batons but also hit them with punches and kicks while dragging them by their hair to put them in the police vans.

According to police, protest demonstrations were banned in the area under section 144, hence, they baton charged the enraged nurses. The nurses accused Sanuallah of ordering and coordinating all these attacks on the peaceful protesters.The nurses demanded registration of FIR against the cops and traders who manhandled them and violated the sanctity of their profession. The nurses also issued a province-wide strike call against the government and pledged to surround the CM Secretariat Friday onwards.The incident also led to strong condemnation by the civil society, doctors and paramedics associations and political leaders, including Punjab Governor Sardar Latif Khosa.

The governor also demanded a report from the Punjab IGP in which it was directed to explain as to why the cops and traders were allowed to maltreat the peaceful protesters.Talking to media persons, Standing Committee for Health Chairman Dr Saeed Ellahi said that a peaceful negotiation would be held with the nurses’ delegation today (Friday), whereby the PML-N leader Hamza Shahbaz Sharif along with other political leaders and Health Department officials will meet the delegation and listen to their demands.Pakistan Medical Association and Young Doctors Association in a joint statement also condemned the government’s torture on the protesting nurses. – Dailytimes