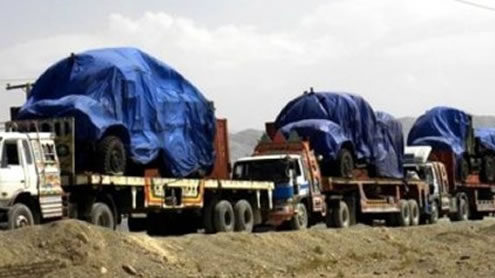 ISLAMABAD – Pakistan refused on Sunday to accept the request by the United States and its allied states to unblock supplies to Afghanistan for the coalition forces before a formal apology coupled with a thorough enquiry into the cross-border NATO air strike in which 24 Pakistani soldiers were killed, as well as stern punishment for those involved in the attack.

Islamabad also told the US that the killing of Pakistani soldiers had deeply impacted the progress made by the two countries on improving relations and forced Pakistan to revisit its terms of engagement with the US. Islamabad’s refusal came despite the fact that the US secretary of state, foreign secretaries of other NATO nations and the NATO chief himself expressed grief over the loss of life in the attack.
The NATO leaders said investigations would be made into the attack and Islamabad should not block supplies to the coalition forces fighting in Afghanistan against the Taliban insurgents. Pakistan has not only blocked the NATO supplies to Afghanistan but has also asked the US to vacate the secretive Shamsi airbase within 15 days. A joint statement by US Secretary of Defence Leon Panetta and Secretary of State Hillary Clinton, who offered their condolences for the loss of life, backed an investigation into the incident and stressed the importance of the US-Pakistani partnership. “Instead of accepting the US and NATO request for allowing the supplies to Afghanistan for the coalition forces, Pakistani Foreign Minister Hina Rabbani Khar conveyed to them the deep sense of rage felt by the Pakistani people over the killing of at least 24 soldiers in a cross-border air strike by NATO aircraft from Afghanistan,” said a Pakistani diplomat here who asked not to be identified by name.

He said the foreign minister told her counterparts from Washington and other NATO capitals that first there must be a formal apology from them over the killings followed by a thorough investigation into the incident and stern punishment to the people responsible for it. Only then would Pakistan decide what to do, she added. A statement issued here by the Foreign Office said Khar told Clinton that the incident had forced Pakistan to revisit the terms of its engagement with Washington. In her conversation with Secretary Clinton, Khar said: “The incident negates the progress made by the two countries on improving relations and forces Pakistan to revisit the terms of engagement.”

Khar said that attacks like the one in Mohmand were “totally unacceptable”. “They demonstrate complete disregard for international law and human life, and are in stark violation of Pakistani sovereignty,” she said. She told Secretary Clinton about the Defence Committee of the Cabinet (DCC)’s decisions to stop NATO supply routes and that the US should vacate the Shamsi airbase within 15 days. Clinton said she was deeply saddened by the event and conveyed the US government’s desire to work with Pakistan to resolve the issue.

Khar also spoke to British Foreign Secretary William Hague on Saturday night to convey the decisions taken by the DCC. She told him of the deep sense of anger prevailing in Pakistan over the unprovoked attacks by NATO. Hague expressed grief at the loss of life.
German Foreign Minister Guido Westerwelle also telephoned Khar to express support and solidarity with the people and government of Pakistan. He said the NATO/ISAF attack was unacceptable and supported a full investigation.

The German foreign minister said his country was fully aware of Pakistan’s sacrifices and contributions. He hoped that the incident would not affect political cooperation. Khar briefed him on the gravity of the situation created by the attacks and its repercussions. She also briefed him on the DCC decisions.

Pakistan has also protested to the Afghan government over the attacks. Foreign Office Spokeswoman Tehmina Janjua said the protest underscored that the use of Afghan territory against Pakistan by NATO/ISAF was also a violation of ISAF’s mandate for operations in Afghanistan.
“Afghanistan should take necessary measures to ensure that such acts are not carried out from its territory against Pakistan,” she said. However, on Pakistan’s participation in the Bonn Conference, the spokeswoman clarified that the matter was being examined and no decision had yet been taken in this regard.

In a related development, Turkish Foreign Minister Ahmet Davutoglu, a close ally of Pakistan, called Foreign Minister Khar on Saturday night to express solidarity with the people and government of Pakistan in the wake of the attack.
Khar thanked Davutoglu and condemned the attacks. Davutoglu assured Khar that Turkey, as a member of NATO, would ask for an impartial enquiry into the attack.Pakistantoday