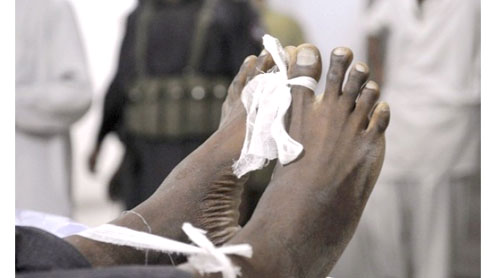 QUETTA: The University of Balochistan mourned the death of another teacher on Tuesday. Mohammad Danish Alam, a lecturer at the university, was gunned down by unidentified men in Zarghoonabad area, a suburb of Quetta, on Tuesday morning in what appeared to be a sectarian target killing.

Police said that Danish Alam, a lecturer at the Science and Information Technology Department, was on his way to university on his motorcycle when gunmen sprayed him with bullets. He was shot in the head and chest, killing him instantly. As is usual, the attackers managed to escape.Alam was the second university teacher to be killed this year, while a total of five university professors and lecturers have been gunned down since 2008.A Baloch intellectual and professor of Islamic Study Saba Dashtiari was shot dead on Saryab Road, near the university, in June this year.

Saba Dashtiari, whose real name was Ghulam Hussain, was a prominent  activist who took part in protest rallies and demonstrations held by the Baloch Students Organisation Azad, Balochistan National Front and Baloch Republican Party against disappearances and target killings of Baloch nationals.The other victims include Pro Vice-Chancellor Professor Safdar Kayani, lecturer at Media and Journalism Department Nazima Talib and Professor Library and Sciences Department Khurshed Ansari. To date, there has been no progress in all these cases.

Ala’s body was shifted to a local hospital after which it was handed over to his heirs after medico-legal formalities. “The victim was hit by five bullets,” doctors said.Alam was from Gilgit and had no enmity with anyone. He worked seven years as a lecturer at the Science and Information Technology Department of the University of Balochistan, one of his colleagues told The Express Tribune.The Academic Staff Association has demanded that the government launch a probe into the killings and bring culprits to justice.Talking to The Express Tribune, a senior police officer said Alam belonged to the Shia sect and there is a possibility that the attack was of a sectarian nature. “Police are investigating the murder. – Thetribune