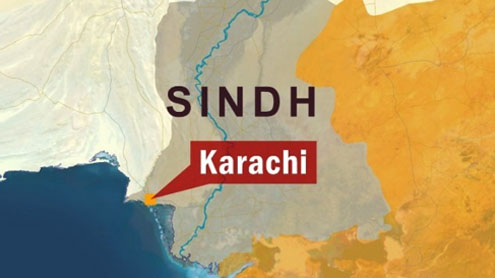 KARACHI: The law enforcement agencies nabbed nine criminals, including an underworld don, in different raids carried out in the city here on Thursday.

A team of Crime Investigation Department (CID) on a tip-off conducted a raid in Kharadar and arrested a notorious underworld don Ghulam Patni, recovering a huge cache of weapons from his possession.SSP Fayyaz Khan said that the accused was involved in several serious offences, including target killings and extortion. During initial interrogation, he confessed to have been involved in over 30 targeted killings.

SSP Khan further informed that the police have recovered a Kalashnikov, a 9mm pistol and two hand grenades from his possession. According to him, Patni confessed to have been involved in the murders of several notorious gamblers including Junaid, Asif, Waheed Badshah, Nadeem alias Munda and two policemen Ansar and Jahangir. His younger brother Mohammad Ali Patni also runs a gang in the city.

Further investigation was underway.Meanwhile, the officials of crime branch on a tip-off raided a place near Khurramabad Rice Depot and arrested five robbers. Their two accomplices managed to flee from the scene.

The accused persons during initial course of investigation confessed to have been involved in more than 200 robbery bids. The detained bandits were identified as Asim, Muhammad Akram, Amjad, Kaleem and Babar alias Ali. They said that police had also recovered four pistols, ten cell phones, five bikes and other snatched valuables from the accused.

Similarly, Mauripur police claimed to have nabbed three extortionists in a raid at Mauripur Truck stand. Police said that the accused persons, identified as Rajesh, Abdullah Baloch and Junaid Baloch, were arrested with two TT pistols when they reached the said spot to collect extortion from the transporters.