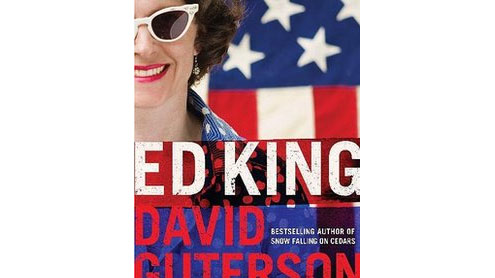 An account of a frenzied encounter in a shower has earned US writer David Guterson the annual Bad Sex In Fiction Award.

He beat the likes of Stephen King with a scene from his novel Ed King, a modern version of the fable of Oedipus.The offending passage in the book is introduced as “the part where a mother has sex with her son”.On hearing of his win, Guterson said: “Oedipus practically invented bad sex, so I’m not in the least bit surprised.”The author, who is based in the US, was unable to attend the prize ceremony at the In and Out Naval and Military Club in London.

Instead, EastEnders star Barbara Windsor presented the award to his publishers.The ceremony is now in its 19th year, having been established by Auberon Waugh in 1993.Previous winners include Norman Mailer, AA Gill, Melvyn Bragg and Tom Wolfe.The award is run by The Literary Review, which says its purpose is to “draw attention to the crude, tasteless, often perfunctory use of redundant passages of sexual description in the modern novel, and to discourage it”.

Guterson is the author of the best-selling Snow Falling on Cedars, which was turned into a film starring Sam Shepard and Ethan Hawke in 1999. Ed King, his fifth novel, takes the Sophoclean tragedy Oedipus Rex (the title is a pun on the original) and transports it to late 20th Century Seattle.The story revolves around a baby boy who is given up for adoption and goes on to become one of the world’s most powerful men, killing his father and sleeping with his mother in the process.

The scene concludes: “Then they rinsed, dried, dressed, and went to an expensive restaurant for lunch”.Reviewing the novel in the Express, David Robson argued that “Guterson’s descriptions of hyperactive incest are absolutely unbearable and not in a good way”.Other nominees this year included Haruki Murakami’s 1Q84, The Final Testament of the Holy Bible by James Frey, Chris Adrian’s The Great Night and Lee Child’s The Affair. – BBC