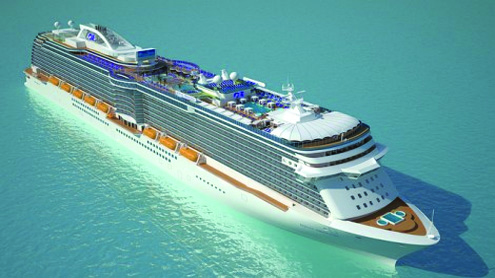 The 499 cases occurred on the Ruby Princess and the Crown Princess, both based out of Fort Lauderdale, Florida, said cruise line spokeswoman Julie Benson.On Saturday, the Crown Princess returned from a Caribbean cruise with 364 sick passengers and 30 sick crew members, she said. In all, about 3,100 people were on board.

Sunday morning, the 3,000 passengers and crew on board the Ruby Princess disembarked, Benson said. Of those on board, 92 passengers and 13 crew members were reported ill.”We’re working in close cooperation with the CDC to identify the cause,” Benson said. Investigators with the Centers for Disease Control and Prevention have been on board both vessels and monitoring cleaning procedures, she said.

The Crown Princess was cleaned Saturday and has returned to sea, she said. The Ruby Princess was also set to return to sea Sunday afternoon. Passengers on both departing cruises are notified of the outbreak and cleaning, she said, and advised of protective measures.Norovirus causes symptoms including diarrhea, vomiting and stomach pain, according to the CDC. It is spread from person to person through contaminated food or water or by touching contaminated surfaces. -CNN