by top3
in Business, Pakistan, Punjab
0 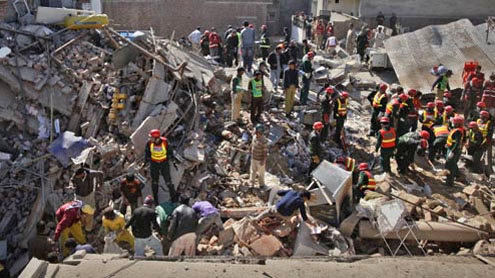 LAHORE: The Human Rights Commission of Pakistan has expressed alarm at the ‘shoddy’ state of affairs that led to the tragic death of nearly two dozen people in Lahore, when a boiler explosion reportedly brought down a three-storey pharmaceutical laboratory.

In a statement on Wednesday, the Commission said: “Our heart goes out to the families of the poor workers killed in the collapse of a so-called pharmaceutical laboratory building in Lahore.The disaster has exposed the utter non-existence of any regulatory system, which is as horrific as it is incredible.“We now learn that the factory was operating without a licence and in a residential area, that most of the workers were women and very young children employed in clearly exploitative conditions, that the establishment had not been assessed for environmental impact and the premises had not been inspected because the provincial government has abolished labour inspectors’ visits to factories since 2002.

“The banning of labour inspection is a travesty that amounts to the government’s acquiescence into industrialists’ greedy operations above all else.“How such an indefensible policy continues to prevail says something about the persuasive power of big business.“If such appalling exploitation and illegalities go on unnoticed and unchecked in the country’s second largest city, it should not be too difficult for anyone, including the rulers, to imagine how bad things must be in places that are not quite so close to the seat of government or are not as well covered by the media.“Those in power must realise that the people have entirely reasonable and exceedingly diminishing expectations of the government safeguarding their interest.“They must pre-empt such tragedies rather than reacting with posthumous compensation packages and rhetoric.

“There is plenty of blame to go around and fixing such a broken system would take some doing.“For the workers at the factory in Lahore it is too late but for the sake of countless others who continue to work in similar and worse conditions, it is hoped and demanded that the government shows some imagination and spine to put a stop to the policies that make a mockery of the people’s rights and precipitate such disasters.” – Dawn