by top3
in Pakistan
1 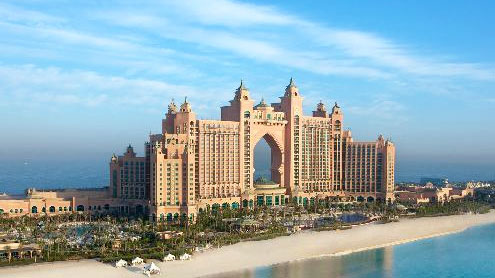 DUBAI :  It’s the show that promises to bring out every guy’s inner child with its eclectic display of gadgetry and luxury paraphernalia. Big Boys Toys is the region’s premier lifestyle event and opens its doors to invited guests at 1pm today.

Situated at Atlantis the Palm Hotel, Dubai, the three-day event, which is open to the general public on Friday and Saturday, brings even more exclusive products and services for the man who wants it all. One of the premier attractions at the show will no-doubt be the multi-million-dirham eleMMent Palazzo mobile home. The eleMMent Palazzo, by Marchi Mobile, is a mobile palace for the elite.

The expandable pop-up fly bridge lounge is fitted with multiple bars overlooking two floors that contain a master bedroom with an integrated bathroom and a couch that can be converted into bar furniture at the push of a button.Other vehicle debits include the Middle East’s own exclusive Nissan GT-R VVIP which has a staggering 0-k mph time of 3.6 seconds and dazzles with 24-carat gold-plated aspect panels, grill, and the exclusive VVIP badges.

Another debut, the Hulme CanAm Spyder named in honour of Denny Hulme, New Zealand’s only Formula One World Champion and double CanAm Champion, is not for the faint hearted. Powered by a hand-built, supercharged, 7,000cc, Chevy V8 engine, it provides amazing torque and tractability and can be booked for delivery on site. Admission tickets for February 10 and 11 can be bought online from Time Out Tickets, Virgin Tickets, BoxOfficeME.com and TicketingCo.com. Tickets are priced at Dh100.

Tickets can also be purchased at the following outlets: Virgin Megastores, select outlets of Zoom, Choithrams, Hallmark and Spinneys and EPPCO and ENOC petrol stations. The show at Atlantis lasts from 1pm – 10pm on both days. Call 055 7766998 for more information. – Khaleejtimes

Bright idea: Govt to give away 30 million energy savers

Bright idea: Govt to give away 30 million energy savers