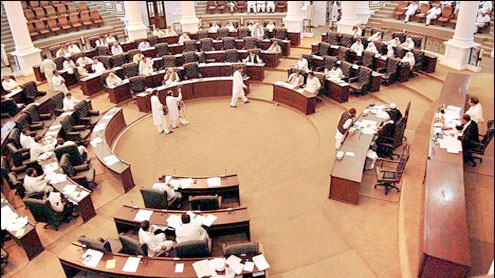 PESHAWAR: The Khyber Pakhtunkhwa Assembly has strongly condemned the recent ‘resolution of American Congress regarding Balochistan’, declaring it as a conspiracy against sovereignty and integrity of Pakistan.

Declaring the resolution as an open interference in Pakistan’s affairs, they said that it was USA’s retaliation for their forced vacating of Shamsi Airbase and barring NATO/ISAF supplies by Pakistani government.Earlier, supporting the KP resolution, PML-N’s Javed Abassi expressed great displeasure over the discriminating American Congressional resolution and termed it nothing short of American conspiracy to harm nuclear assets.

JUI’s Kafayatullah said that the entire nation was paying for misdeeds of former president Musharraf, and said that despite the fact that USA and Afghan were the only party to war against terrorism, yet Pakistan with 40,000 martyred and losses worth $ 70 billion was the only one to suffer immensely.Among others PML-Q’s Qalandar Lodhi, and senior Provincial minister Bashir Bilour also lambasted American Congressional resolution. – Onlinenews