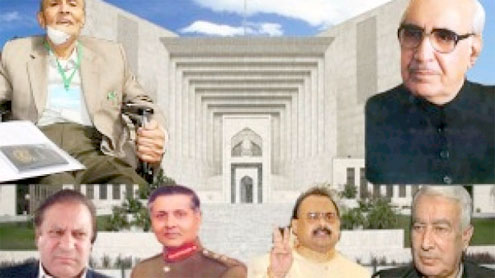 Habib told the court that he could not bear pressure from the then president and arranged Rs1.40 billion. He said Gen Aslam Baig and an ISI officer Col Akbar opened several accounts. He said Baig told him that the money was needed for national interest.Later talking to media, ex-chief of the Mehran Bank Yunis Habib has admitted paying the sum of Rs 350 to 400 million on the orders of the then president Ghulam Ishaq Khan and ex-COAS Mirza Aslam Beg.

Yunis Habib told the journalists that Inter Services Intelligence (ISI) and Yusuf Advocate had distributed money among different politicians.He revealed that MQM chief Altaf Hussain had been rewarded with Rs. 20 million by Yousuf Advocate adding that a sum of Rs. 2.5 million were given to Mian Shahbaz Sharif by Asif Jamshed while he himself gave Rs. 3.5 million to Mian Nawaz Sharif.

Habib claimed that he had no option other than complying with the said order. The money was allegedly paid to get the Islami Jamhoori Etihad elected in the general elections against Pakistan People’s Party. He also disclosed Roedad Khan forced him to file a case against Asif Ali Zardari.He also mentioned the name of Col Akbar who gave him the account numbers for transferring the money. General Aslam Beg arranged Younus Habib’s meeting with president, he allged.He also disclosed Aslam Beg demanded that amount for the sake of national interest. – Onlinenews

SC directs PM to write to Swiss without any advice