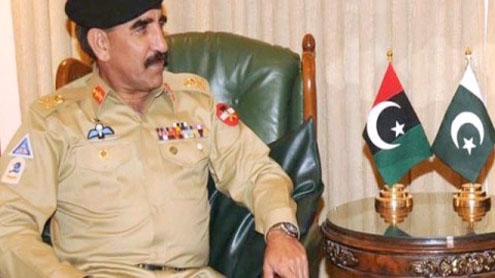 The new DG, now serving as the commander of one of the most important corps (V corps) in Karachi, would take over charge on March 18, the day Gen Pasha retires.Lt General Zaheerul Islam was appointed the Karachi corps commander in October 2010. He is in his late 50s and is due to reach the age of superannuation in the year 2014.Following his posting, Rangers Sindh DG Ijaz Chauhdry was appointed the new corps commander for Karachi, while Major General Rizwan Akhtar was likely to be named the Rangers Sindh DG.

Like General Pasha, General Zaheerul Islam is considered very close to Chief of Army Staff General Ashfaq Kayani.The corps commander’s post is generally assumed by someone having the confidence of the army chief and the post of Karachi is among the most important ones.Prior to being appointed as top military commander in Karachi, Gen Zaheer served in the ISI as deputy DG (internal intelligence) for two-and-a-half years and he was a major general at that time. In ISI, he looked after domestic intelligence and security related matters being the senior most official at the internal wing of the country’s major spy agency. He is from the Punjab Regiment of Pakistani Army, same as that of Gen Kayani.

He also headed a division command in Murree before serving in the ISI. President Zardari conferred the military award of Hilal-e-Imtiaz on him in recognition of his meritorious professional services in March 2009. Islam carries a reputation of professionalism and discipline.Pasha’s departure is said to bring some relief and respite for the American intelligence officials who had been given a tough time during the last one year or so by him. The ISI-CIA relationship turned more complicated after the US special forces killed al Qaeda leader Osama bin Laden in Abbottabad on May 2 last year. Gen Pasha reached the age of superannuation in March 2010 but was given a one-year extension twice.

With his tenure ending, Gen Pasha had approached Gen Kayani in December last, asking to relieve him of his duties as he was not interested in a third extension.With United States having its eyes fixed at the endgame in Afghanistan, the American authorities were keenly monitoring the evolving situation as for the appointment of new ISI chief owing to Pakistani intelligence agency’s key role in anti-terrorism global campaign.

“Now that the ISI chief has been appointed, US officials would be looking forward to engage with him as soon as possible to sort out the contentious matters like the restoring the blocked NATO supplies, re-deployment of CIA and US military trainers here and drone attacks etc,” said a diplomatic source, requesting anonymity.He said being someone close to Gen Kayani, the western states assumed that the new ISI chief too would be anti-Taliban and a person with moderate views, something of relief and solace for them. – PT