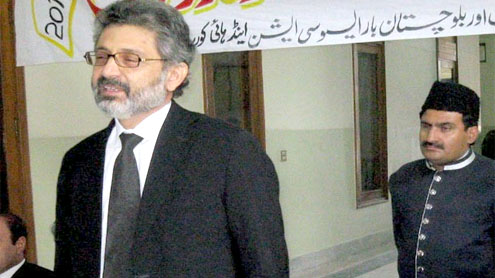 The High Court directed Balochistan’s Secretary Higher Education to appear before the court in the next hearing along with complete information about teachers killed in incidents of target killing.The court expressed its strong resentment on the appalling condition of the education sector in Balochistan, while presiding over a petition filed by the Balochistan Lecturers Association. The hearing was presided over by Chief Justice Isa and Justice Qadir Mengal.

The petition pertained to hiring of Assistant Professors and Lecturers on contract basis. The petitioner contended that vacant positions could not be filled on contract basis, but instead through the Balochistan Public Service Commission.The court had already restrained the Education Department from recruitment of Assistant Professors and Lecturers on contract basis.The Education Department submitted the report about the recruitment of lecturers at Muslim Bagh College to which the court objected, saying that the information provided was incomplete and issued directives to summon the Secretary Higher Education, after which the hearing was adjourned for an hour.

On resumption of the hearing, Director School and Colleges appeared before the Court and said there were a number of schools in Muslim Bagh with only one teacher, adding that there were also colleges with insufficient teachers.Chief Justice said the appointment of lecturers on contract basis was discrimination against Balochistan and had pushed the education sector on the verge of destruction, jeopardising the future of this region. “Teachers have great respect in a civilised society, but unfortunately teachers are being brutally killed in Balochistan,” he remarked.The court directed the Education Department to appoint Assistant Professors and Lecturers through the Public Service Commission instead of contract appointments. – Thetribune