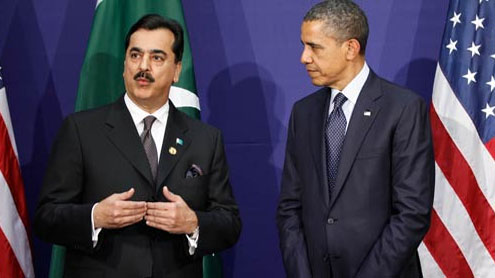 SEOUL: US President Barack Obama called on Tuesday for a balanced approach in ties, one which respected Pakistan’s sovereignty and also addressed American national security concerns.

“That we can achieve the kind of balanced approach that respects Pakistan’s sovereignty but also respects our concerns with respect to our national security,” President Obama told reporters before holding talks with Prime Minister Yousuf Raza Gilani on the sidelines of the Nuclear Security Summit.It was the highest contact between the two countries since their relations went into a freefall following the US raid on Osama bin Laden’s compound and hit rock bottom with Nato border strikes.

The meeting took place when Pakistan’s parliament resumed its debate on proposals framed by the committee on national security for re-defining the nature of relationship with the US.Observers here are of the opinion that President Obama’s message was aimed at parliamentary proposals that have mainly called on the US to cease drone attacks, end covert operations inside Pakistan and apologise for the Nov 26 Salala attack, in addition to warning against hot pursuit.President Obama hailed the parliamentary process.

“But I welcome the fact that the parliament of Pakistan is reviewing, after some extensive study, the nature of this relationship.”Speaking on the occasion, Mr Gilani reaffirmed Pakistan’s commitment to a peaceful and stable Afghanistan and appreciated President Obama’s statement about respect for his country’s sovereignty.Neither side divulged details of the discussions but sources on both sides confirmed that the two leaders mainly deliberated on some of the major sticking points in the proposals being discussed by the parliament, including the demand for ending drone attacks.

While President Obama asked for respect for US “needs to battle terrorists who have targeted us in the past”, Foreign Minister Hina Rabbani Khar told journalists at a post-meeting session that during the talks, Mr Gilani insisted on drone attacks being counter-productive and violation of sovereignty. It was not difficult to make out that differences were far from over.This impression was further reinforced by Ms Khar when she said the US was told to refrain from “using tools that take us further away”.

The US decreased the frequency of drone attacks following last year’s border post incident, which triggered the process for review of ties, but is unwilling to fully cease operations which have killed a number of senior Al Qaeda and other militant leaders.An Associated Press report claimed that the US had offered to provide Pakistan with advance notice of strikes and to observe new limits on the types of targets for pacifying Pakistani concerns about the drones programme. However, the offer made in January through CIA Chief Gen Petraeus, was rejected.

Notwithstanding the lingering differences, a Pakistani diplomat, who attended the meeting, said “genuine desire to re-engage” was obvious on both sides.The cautious optimism was reflected in the media comments by US Deputy National Security Adviser Ben Rhodes, who said the two men were “working through the tensions”. He said the meeting provided an opportunity “to hear directly from one another about what their views are”.What could be seen as a tangible outcome of the Seoul meeting is that Pakistan is likely to be invited to Nato summit in Chicago in May. – Dawn