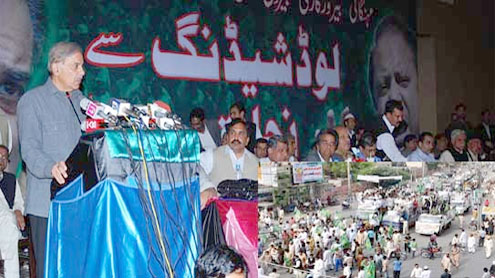 LAHORE/GUJRANWALA: Urging people to rise against the ‘callous’ government and oust it, the Punjab chief minister says he will soon give a call for long march in this respect.

“The masses should stand up and get rid of this callous (federal) government,” Shahbaz Sharif said, adding he would soon give a call for long march for the purpose as a meeting of industrialists, investors and workers had been convened for Wednesday (today).He told a press conference here on Tuesday that Punjab was suffering around Rs300 billion annually because of energy crisis as the province was being pushed towards darkness through power loadshedding under a conspiracy.

Recalling that former president Pervez Musharraf had talked of US threats of sending Pakistan to the stone age, the chief minister said President Asif Zardari was a disciple of the ex-army ruler, who was pushing Punjab into the stone age.He said the federal government was taking the power issue for granted. Had it been serious, it would have by now completed various electricity-producing projects based on local resources like Thar and Lakhra coal.He said: “The federation is not ready to offer sovereign guarantees for the projects.”

Shahbaz said the rulers were hoodwinking the masses by releasing just Rs10 billion out of Rs400 billion outstanding against it of the independent power producers (IPPs) as the prime minister was neither fulfilling his promise of fair distribution of electricity among all provinces nor was he resolving the issue of circular debt of IPPs.He lamented that 700MW power generated in Punjab was being given to other provinces.

The chief minister said step-motherly treatment of Punjab would no longer be tolerated as he would contest the case of the people who had given him the mandate (to run the province) “whether it means taking out a long march or resorting to some other form of protest.”He said those who wanted to protest prolonged and unscheduled loadshedding should do so as he as well as PML-N chief Nawaz Sharif were with them. But he appealed to the potential protesters not to damage public and private property. He warned of legal action against those taking law into their hands.

He told a questioner that his duty was to protect life and property of the masses, and not killing them.Replying to another query, he said the ratio of power theft in Punjab was the lowest and payment of bills was the highest in the country so justice demanded that here people should be charged less but the situation was the other way round.

Speaking at a meeting with the business community and public representatives at the District Council Hall in Gujranwala, he said a long march was imperative to get the issues resolved, asking the businessmen to settle the date for the campaign in which he would accompany them. He said at least 4,000 to 5,000 megawatts of electricity could be made available if the government had used coal four years ago. Similarly, he said, 2,000 to 3,000MW of electricity could be generated by sugarcane husk and millions of rupees could be saved under fuel expenditure head.

The chief minister pointed out that the prime minister had convened an energy conference on his request but the formula for the provision of electricity and gas was changed at the last moment.He said Punjab sacrificed Rs11 billion out of its share in the NFC award. He said a delegation of businessmen from Gujranwala would be invited to Lahore to finalise a strategy of protest campaign.PML-N MNA Khurram Dastagir Khan, Gujranwala Chamber of Commerce and Industry President Malik Zaheerul Haq, former president Sheikh Sarwat Ikram and Maj Anjum Pervaiz (retired) also spoke.

Anjum Pervaiz (who interrogated the Sharif brothers after Musharraf’s military coup and got retirement from the army and is now running his own steel mill in Gujranwala) briefed the chief minister on the issues of the businessmen.During his talk, he also touched upon the past incident when he quizzed the Sharifs in Murree but in the same breath lauded Shahbaz Sharif for ‘being brave’. “The Sharif brothers did not seek mercy even when they were facing life threat,” he said.The chief minister reciprocated his appreciation by recalling that Maj Anjum ‘rescued’ him when a colonel summoned him for questioning. – Dawn