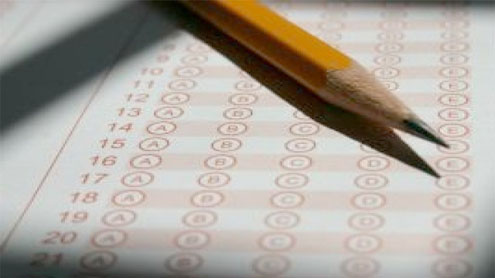 LAHORE: Who is responsible for saving Pakistan and controlling the life-system –Almighty Allah or President Zardari? These were among questions set in the Urdu paper of Lahore Board’s Class 9th examination.

More than 200,000 students appeared in the Lahore Board’s annual exam of the Class 9th on Wednesday. But they were wondered and puzzled by the said questions. The students, who thought they were best prepared to take the test, were surprised to see at least two ‘political’ questions which were also out of syllabus. The exam was conducted in two – morning and evening – sessions. Some of the students, who appeared in the morning session test, told Daily Times that they were asked in the objective-type paper, “What is the system of life based on? [Nizam-e-Zindagi kis per qaim hai]” There were four options to answer this questions – Religion, world, wealth or Zardari sahib. Similarly, students who appeared in the evening paper, said that they also had to answer a “strange” question in their objective-type paper.

“Who is responsible for the security of Pakistan? [Pakistan ki hifazat ka zimmedar kaun hai?” was the question. And the four options to answer this querry were: Almighty Allah, President Zardari, Prime Minister Gilani or masses. When the Lahore Board chairman was asked as to why the board had used the president and prime minister’s names in the question sheet, he told the media, “It was done by mistake and we are probing the matter.” He said that both the question sheets were prepared by teachers from the Dera Ghazi Khan Board, adding that he had raised an objection to the nature of the questions.

A private news channel, meanwhile, reported that initial investigation into the matter revealed that a Dera Ghazi Khan Government Higher Secondary School teacher, Hafiz Ajmal, had prepared the paper. Earlier, Punjab Education Minister Mujtaba Shujaur Rehman had said that strict departmental action would be taken against the persons responsible for including questions on political personalities in examination papers. In a statement, he said that politics should not be made part of educational syllabus, adding that names of political personalities should not appear in question papers.

He said that the controversial question papers had been prepared by a teacher of Dera Ghazi Khan. “It couldn’t come into officials’ knowledge until bundles [of questions papers] were opened,” the minister said. On the other hand, the Punjab Teachers Unions (PTU) defended the paper setter. A PTU spokesman said that selection of questions was the discretion of students “so they should give correct answers to questions”. He also warned against any action against the DG Khan teacher. The Lahore Board chairman has also ordered an inquiry into the controversy. – Dailytimes