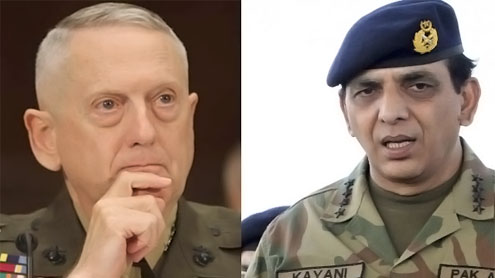 ISLAMABAD: In a second sign in as many days, the frost on Pakistan-US bilateral ties may be melting.

Officially, however, nothing much was said about the talks held at the General Headquarters in Rawalpindi.According to a statement issued by the military ahead of the talks, the top commanders from the two sides were to discuss the investigation of the American airstrikes in November and ways to improve border coordination.The two American generals also separately met Chairman Joint Chiefs of Staff General Khalid Shamim Wynne.

“General James N Mattis and General John Allen remained with Gen Wynne for some time and discussed bilateral matters of professional interests, and the emerging geo-strategic situation of the region,” said a brief Inter-Service Public Relations (ISPR) statement.Sources, however, revealed that the two sides discussed certain proposals to move beyond the Salala incident.The US offered a new mechanism to operate drones inside the country’s tribal belt to take out ‘high-value’ targets associated with the al Qaeda and the Taliban, one source said.

The proposed mechanism will limit the number of predator strikes and offer Pakistan ownership to provide it the necessary face-saving in the wake of growing public anger on drones, the source added.It is not clear, however, if the military leadership shows any inclination to accept such a proposal.Recommendations prepared by an all-party, bicameral parliamentary panel seek cessation of drone strikes in the tribal areas.Meanwhile, foreign ministry spokesperson Abdul Basit said “there is no question of a compromise on the issue of drone attacks.”

The American generals also discussed the possible reopening of vital supply lines for the US-led Nato forces in Afghanistan.Pakistan is believed to have shown its willingness to lift the ban but under certain conditions.“We are not only seeking to impose additional taxes on Nato goods but also asked the US to pay compensation for the damage caused to our road infrastructure by the Nato containers,” said a military official.

The official dubbed the talks between top commanders as a sign of normalisation of relationship but said no final decision was taken on key issues including Nato supplies and drone attacks.The visit by top American generals comes amidst a debate in parliament on the new terms of engagement with the US. Opposition parties and rightwing groups have alleged that the parliamentary debate is nothing but eyewash.

The flurry of top-level exchanges, after a long hiatus, appears to suggest that the two sides have already covered a lot of ground, despite claims by the government that the normalisation of ties will take place only after parliament approves the new framework. – Thetribune