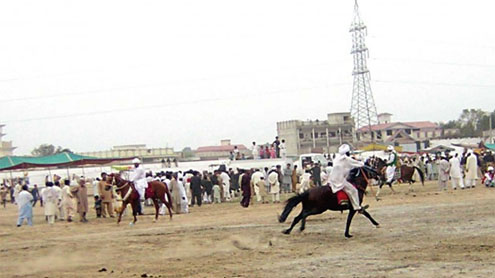 DERA ISMAIL KHAN: Ironically enough, no cricket match has ever been played at the Ratta Kulachi stadium in Dera Ismail Khan, a southern district of Khyber-Pakhtunkhwa (K-P).

However, the horse and cattle show that concluded at the stadium on Sunday had the same hype that is normally associated with intense cricket matches.Held after three years due to the bad law and order situation, a large number of locals thronged to the stadium to attend the show, which traces its history back to the city’s beginnings.

The festival embodies the very culture of the district. And to let people participate in it, the administration announced a two-day holiday across district. Typically a three-day event, the length of the event was cut short by authorities. But for the entertainment-starved locals, it was nonetheless a blessing.People showcased their cattle, besides enjoying thrilling competitions of kabaddi, horse and dog races. The event also has a positive impact on the local economy as people from as far away as Lakki Marwat and South Waziristan had come to buy cattle.

Ghulam Yasin, a resident of Muza Islam in the outskirts of the city, had brought his dog for the race. He told The Express Tribune that a rabbit would be set free before dogs, and whichever dog caught it first, would be declared winner. Confident of his dog’s abilities, he was looking forward to the trophy and Rs3,000 cash reward that goes to the winner. Dog fights, he added, are no longer a part of the festival because the government banned it.

An aged Allah Baksh said that he had come to enjoy kabaddi matches. “I’ve participated in these kabaddi matches in my times,” he said, adding that the authorities had not made proper arrangements, pointing to the clouds of dust bothering visitors.

In his opening remarks, K-P Information Minister Mian Iftikhar Hussain said that revival of the horse and cattle show was an example of the people’s fighting spirit. Strict security arrangements were made for the event, with all entrants being frisked for weapons and explosives. – Thetribune