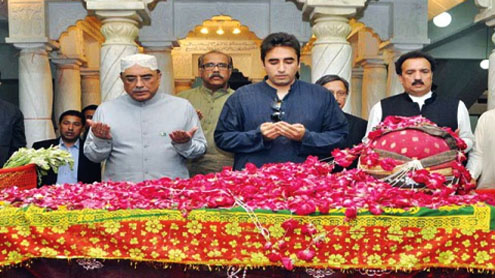 NAUDERO: At the PPP Central Executive Committee’s meeting held with Co-Chairperson Asif Ali Zardari in the chair at Naudero on Tuesday, there was a unanimous feeling of dismay at a great leader like Zulfikar Ali Bhutto not having received justice even after 33 years of his death, despite the fact that President Zardari had sent his case to the Supreme Court a year ago. Bhutto’s soul was still running from pillar to post in search of justice.

The CEC also through a joint resolution demanded arresting the killers of Shaheed Benazir Bhutto, while promising to further the reconciliation policy under the vision of Shaheed Bhutto in country.PPP Chairman Bilawal Bhutto Zardari also attended the CEC meeting at the President Camp House. All the committee members, many of them are the federal and provincial ministers, also participated in the gathering organised on the eve of 33rd death anniversary of Shaheed Zulfikar Ali Bhutto.

Speaking on the occasion, Bilawal asked judiciary to punish the terrorists. “More than 50% of terrorists presented before our courts have been freed. I am told there is a lack of evidence and the fault lies with the prosecution.”Agencies add: PPP Chairman Bilawal Bhutto Zardari has said that the Supreme Court should apologise for the judicial murder of Zulfikar Ali Bhutto. “The Supreme Court of Pakistan should apologise as an institution for the judicial murder.”

Addressing the CEC, Bilawal said the Zulfiqar Ali Bhutto (ZAB) reference, which was pending before the apex court, provided a golden opportunity to ‘right the wrongs of the past’.“The Supreme Court of Pakistan sentenced Shaheed Bhutto to death by hanging for a crime he did not commit. This judicial murder was neither the first nor the last flawed decision our courts have made.”

In what was his first full-blown political discourse that analysts would interpret as his formal launch into politics, Bilawal said he did not believe if the Sharifs of Lahore could get their cases disposed of but ZAB was yet to receive justice. “Let’s hope the court doesn’t repeat double standards,” he added.The PPP chairman also called for hearing the Mukhtaran Mai case again and said all the terrorists should be get punishment after a proper trial.

“The rapists of our sister Mukhtaran Mai have been freed by the courts, presumably for the same reasons. How can there be enough evidence to hang SZAB but not enough evidence to keep terrorists and rapists in prison.”Without referring to the SC orders on writing a letter to the Swiss authorities, Bilawal said the elected Prime Minister of Pakistan would not violate the Constitution of Pakistan and the Vienna Convention. “No one will be allowed to have a trial of the corpses of the martyrs,” he remarked.

Monitoring Desk adds: President Asif Ali Zardari has reiterated his tirade against the Supreme Court, saying that the ‘murder’ of Zulfikar Ali Bhutto is a blot on the performance of the apex court.“The injustice has not only been done to Bhutto but also to the history and the people,“ the president said in his address to the public on the eve of the 33rd death anniversary of ZAB in Naudero late Tuesday night.Zardari went on: “Public verdict, not of a judge, lives in the history…. Now the history is saying that a great injustice was done to Bhutto. No one knows the names of judges who passed verdict against Bhutto but the former PM lives on.”

He added PM Gilani has been loyal to the Constitution (by not writing to Swiss authorities) and not backing him (President). “Gilani talks of the Constitution. His only sin is that he wants to liberate the Seraikis from the yolks of Lahore Throne.”The President said “Some people want us to fight against Punjabis, Urdu-speaking, in Balochistan and in mountains, but we don’t want to fight with any nationality. We want to wage war on poverty and other people-related problems.”

“We have been fighting off the attacks (by opponents) for last four years, he said, claiming that he had the ability to retaliate against such bids.”He called upon his supporters not to pay head to the media. “No worries. I am here to face all the troubles.”About election, he pledged to hold free, fair and transparent elections. – Nation