New rules of engagement with US must respect sovereignty: PM 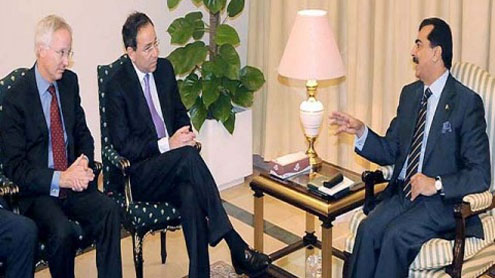 ISLAMABAD: Prime Minister Yusuf Raza Gilani Wednesday reiterated in a meeting with a top American diplomat that new rules of engagements between Pakistan, USA/NATO/ISAF must respect sovereignty and territorial integrity of Pakistan.

U.S. Deputy Secretary of State, Thomas Nides who is the second senior U.S. official to visit Pakistan in a week, called on Prime Minister Gilani in Islamabad, the Prime Minister’s office said.Nides is visiting Pakistan days after Centcom chief Gen James Mattis and the U.S. commander of ISAF forces in Afghanistan Gen John Allen’s meetings with military leaders in Rawalpindi.

The NATO airstrikes on two Pakistani border posts and killing of 24 soldiers in November had badly affected bilateral relationship and Islamabad called for parliamentary review of relationship with the U.S. and NAT.“Relations with US must be based on mutual respect and mutual interest, said the Prime Minister,” the official statement quoted PM Gilani as telling the U.S. diplomat.

The Prime Minister further stated that Pakistan would like to build bilateral relations with the U.S. based on mutual respect and mutual interest, it said.“We can achieve our objective, peace and stability in region, and Afghan reconciliation through greater cooperation and on the basis of mutual trust”, the Prime Minister maintained.Gilani emphasized that the ongoing Parliamentary review process offered an unprecedented opportunity to bring transparency and credibility to the rules of engagement with USA, NATO and ISAF.

Thomas Nides, Deputy Secretary of State underscored that US fully respects Pakistan’s sovereignty and territorial integrity, the statement said. He emphasized on the importance that the U.S. government attaches to its relationship with Pakistan.He said that the U.S. recognised Pakistan’s role as an important country within the region. He further stated that the U.S. was looking forward to re- engage with Pakistan after the ongoing Parliamentary review process was concluded.